Did gold come from outer space? Where do scientists think it came from? Read on to learn more about what happens when two neutron stars collide and what is created.

Scientists have often wondered how the gold, uranium, and platinum elements found all over the world formed here on Earth. Furthermore, they speculated that those elements, like iron, formed in outer space. Recent events in August of this year gave them answers to years of speculation. They witnessed and captured two neutron stars colliding and the formation of the heavy elements.

The constellation Hydra, known as the longest constellation, contains a spiral galaxy located over 130 million miles from Earth. Discovered in the second century by Ptolemy, the constellation stretches out like a long snake. Within the location of the galaxy sits two neutron stars. Neutron stars are city-size stellar objects with a mass about 1.4 times that of the sun. Born from the explosive death of another, larger stars, these tiny objects pack quite a punch. Therefore, they are so dense that a teaspoon of their matter weighs 1 billion tons. Finally, as time went by, the two neutron stars grew closer to each other and collided. 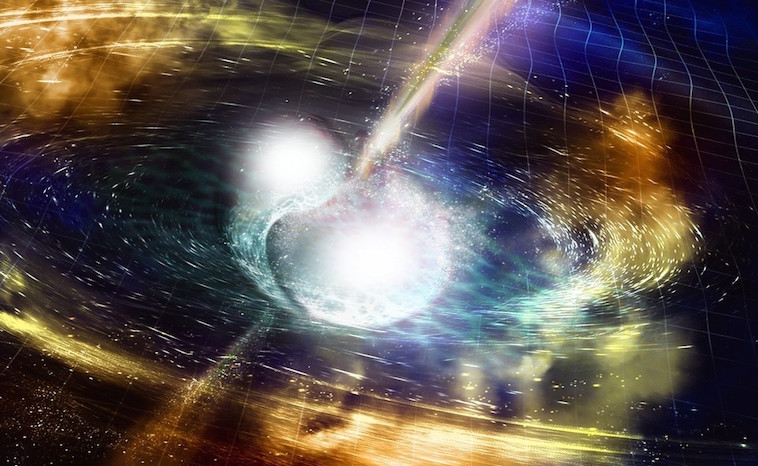 The crash, called a kilonova, generated a fierce burst of gamma rays and a gravitational wave, a faint ripple in the fabric of space and time, first theorized by Albert Einstein. The signal of an explosion arrived on Earth on Aug. 17 after traveling 130 million light-years. A light-year is 5.88 trillion miles.

NASA’s Fermi telescope, which detects gamma rays, sent out the first alarm. Then, 1.7 seconds later, gravity wave detectors in Louisiana and Washington state that are a part of the LIGO Laboratory, whose founders won a Nobel Prize earlier this month, detected the crash. It issued a worldwide alert to focus telescopes on what became the most well-observed astronomical event in history.

The first optical images showed a bright blue dot that was very hot, which was likely the start of the heavy element creation process. This process erupted out of the neutron star debris. After a day or two that blue faded, becoming much fainter and redder. After three weeks the light completely disappeared.

The colliding stars spewed bright blue, super-hot debris that was dense and unstable. Some of it gathered into heavy elements, like gold, platinum, and uranium. Scientists had suspected neutron star collisions had enough power to create heavier elements. but weren’t certain until they witnessed it.

Calculations from a telescope measuring ultraviolet light showed that the combined mass of the heavy elements from this explosion is 1,300 times the mass of Earth. Consequently, the debris went many different directions very quickly through the universe. Scientists do not believe that it any debris is heading toward. By the same token, the scientists hope that one day these elements will clump together and form planets.

“We already knew that iron came from a stellar explosion, the calcium in your bones came from stars and now we know the gold in your wedding ring came from merging neutron stars,” said University of California Santa Cruz’s Ryan Foley. It will be interesting to see if one day planets do form before our very eyes from the leftover debris of a kilonova.