What did the residents of north-central Ohio witness the night of October 18, 1973? Some experts say that this incident may be the most credible eye witness accounts in UFO reporting.

At approximately 10:30 p.m., a UH-1H helicopter with the United States Army Reserve left Port Columbus en route to Cleveland Hopkins airport. In command, in the right-front seat, was Capt. Lawrence J. Coyne. He was 36 years old with 19 years of flying experience.

In the left-front seat, at the controls, sat 1st Lt. Arrigo Jezzi, 26 years old and a chemical engineer. Behind Jezzi sat Sergeant John Healey, 35, a Cleveland policeman who was the flight medic. Crew chief, Sergeant Robert Yanacsek, 23 years old, a computer technician, was also onboard.

The helicopter flew at 2,500 feet above sea level above mixed hills, woods, and rolling farmland. It averaged an elevation of 1,200 feet. The night was clear, calm, and starry.

Around 11 p.m., 10 miles south of Mansfield, Ohio, Healey noticed a single red light to the west, flying south. A few minutes later, Yanacsek reported a single red light on the southeast horizon. He assumed it was a towering beacon or aircraft port wing light. Suddenly, it then turned toward the helicopter and began rapidly approaching.

Coyne quickly powered toward a descent of 500 feet per minute. He also began contacting the National Guard aircraft tower in Mansfield. He wanted to know if the object belonged to the National Guard. Unfortunately, after the initial contact of “This is Mansfield Tower, go ahead Army 1-5-triple-4,” all transmissions were lost.

Captain Coyne increased their descent to 2,000 feet per minute. However, he still could not outrun the approaching object. Just as the crew braced for impact, the light halted and began hovering above and in front of the helicopter.

Coyne, Healey, and Yanacsek all described a cigar-shaped, slightly domed but otherwise featureless, gray metallic structure. Yanacsek described what appeared to be windows along the top of the dome. There was a red light at the bow and an indented white light at the stern. Then, while the object hovered over the helicopter (plexiglass windows in the roof allowed the flight crew to view it from below), a green ‘pyramid-shaped’ beam similar to a spotlight appeared. It passed over the helicopter’s nose. Then it went through the windshield and upper window panels enveloping the cockpit in green light.

While this happened, the helicopter had begun to climb, as if the object was dragging it upwards, for about 10 seconds.

The object then flew off to the west, leaving the helicopter behind, before executing a turn and racing over Lake Erie. Jezzi estimated that it moved faster than the 250-knot limit for aircraft below 10,000 feet.

Terry Hamilton will never forget what he saw on Oct. 18, 1973, and he suspects dozens of people in Richland and Ashland counties might have seen it too.

He was 15 years old and was riding home from Huron with his father. Suddenly, the pair saw what Hamilton describes as a big ball of light come down from the sky. It traveled about three-quarters of a mile parallel to the road. It moved upward quickly until it was out of sight. 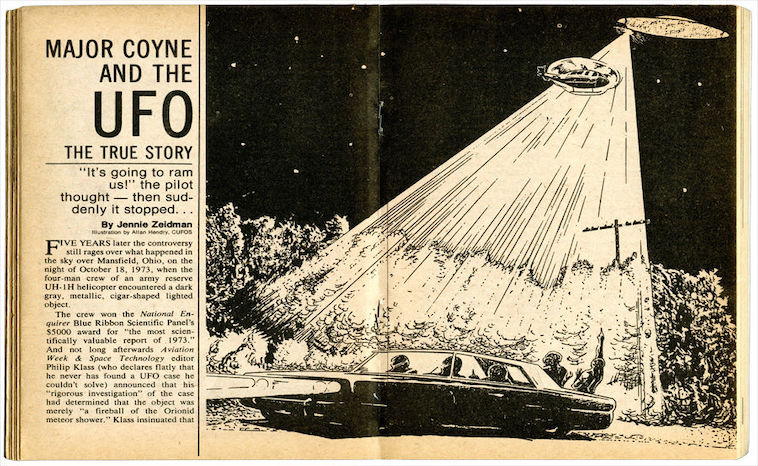 “Another prominent lady in town saw it out her back window,” Hamilton said. “She said she saw a saucer floating toward her house, and she got on her knees and started praying. She thought it was the end of the world.”

The woman reported the craft was low enough and powerful enough that its passing shook the shingles on her neighbor’s barn.

The Charles Mills Lake UFO incident is still on record as a UFO encounter. No government official has ever tried to offer alternative explanations for what the military helicopter crew saw that night. It will forever remain a mystery.