The Changing Colors of the Moon

Have you ever seen an Orange Moon? How about a Blue Moon? You may hear people talk about the moon changing colors. Does it really? Is the moon a chameleon? Read on to find out if our moon changes color.

Every couple of years we hear in the news about a Pink Moon or a Blue Moon and in some cases a Red Moon. We know that the moon actually does not turn color. If it had the same ability as a Panther Chameleon that would be far more entertaining than the standard gray/white we see on a regular basis.

“The moon puts on an elegant show, different every time in shape, color and nuance.” (Arthur Smith)

Let’s explore the different reasons that the moon appears to take on a colored glow.

Many people believe that a second full moon in a month is a blue moon.

“Technically a blue moon is a natural phenomenon that occurs from the ashes of a volcanic eruption or even a forest fire.”

The plumes of scattered particles block out the red light of the moon’s normal spectrum at which point only the blue light can get through. The last true Blue Moon occurred from the eruption of Krakatoa in 1883, which tinged the moon blue for almost two full year. The saying, “Once in a Blue Moon” refers to the extremely long periods between blue moon occurrences.

According to the Old Farmer’s Almanac, the April full moon or Pink Moon gets it’s name from the appearance of the Phlox flower in North America.

April full moons mark festivals and holidays in other parts of the world: in India, Hindus celebrate the birth of Hanuman in a festival called Hanuman Jayanti. The April full moon will also mark the beginning of Passover for the Jewish people. The date of Easter is the first Sunday following the full moon. This follows the vernal equinox on March 21.

During a total lunar eclipse, the Earth moves between the Sun and the Moon and cuts off the Moon’s light supply. When this happens, the surface of the Moon takes on a reddish glow instead of going completely dark. The atmosphere is made up of different gases, water droplets, and dust particles. When sunlight enters the Earth’s atmosphere it scatters the particles that are smaller than the light’s wavelength. Rayleigh scattering refers to the scattering of light off of the molecules of the air.

Colors with shorter wavelengths, for example, those towards the violet spectrum, scatter more than those with longer wavelengths like red and orange. This light then gets bent back to the surface of the Moon and gives it the reddish-orange glow that total lunar eclipses are famous for. The Moon can take on different shades of red, orange or gold during a total lunar eclipse, depending on the conditions of the Earth’s atmosphere at the time of the Eclipse. 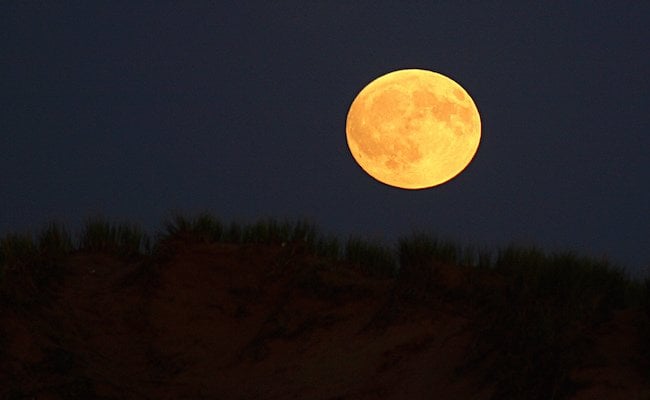 June’s full moon is called the honey moon, because of all the full moons of the year, it is the one most likely to glow yellow throughout the night.  In June, the sun is highest in the sky in the Northern Hemisphere, so therefore, the moon is lowest in the sky. Whenever the moon is low in the sky, we see it through a thick atmosphere and that turns it red or yellow or orange, just like the setting sun.

The moon shows orange colors during several times of the year. Sometimes the moon appears orange even when it’s directly overhead. This occurs when there’s a lot of dust, smoke, or pollution in the atmosphere. The size of those particles will determine the type of color you will see. For instance, the Harvest moon during the fall appears very large and orange.

In the fall, many farmers harvest their crops. Lots of dust from the soil of the crops gets disturbed. The dust floats into the atmosphere. At the same time, the moon is lower in the sky during the fall season. So if there’s more dust in the sky and the moon is closer to the horizon, then what color will the moon be? Orange! That’s where “Harvest Moon” gets its name.

We covered the colors of the moon throughout the year in this article. Take a minute and look up other names the moon has and see how many you can find. This week’s moon is called the “Flower Moon”.