During the early 20th century women worked in the astronomy field making huge discoveries with regards to our understanding of the universe. One noted astronomer, Cecilia Payne, invented the method of detecting spectra in the Sun. Read on to learn more about this remarkable woman’s discovery and life.

Born in 1900, Cecilia Payne spent her early years studying botany, physics, and chemistry at Cambridge University. Although she completed her studies Cambridge did not award a degree to women until 1948. What led her to study astronomy?

While attending Cambridge, Payne attended a lecture by Arthur Eddington, a prominent English astrophysicist. His lecture topic was about an upcoming trip to Príncipe island off the coast of West Africa in the Gulf Of Guinea. He planned to test the theory of Albert Einstein’s prediction of the bending of light by the gravity of the Sun. Einstein’s theory, one of the components of his general theory of relativity, needed testing during a solar eclipse, when stars with an apparent position near the sun become visible. This lecture changed Cecilia Payne’s life.

“The result was a complete transformation of my world picture. My world had been so shaken that I experienced something very like a nervous breakdown.”

The Spectra of the Sun

In her 1925 Ph.D. thesis work, Cecilia Payne invented modern methods of interpreting spectra of the sun and stars. For example, sodium lines as observed in the sun’s spectrum means that the sun’s atmosphere contains some sodiums atoms. Payne invented the mathematical procedure to determine how many sodium atoms exist in that atmosphere. She also proved that if spectral lines of a certain element are not detected in the sun’s spectrum, that element might still be present, but the gas is too hot or too cool or the wrong density for that type of atom to have electrons in the right energy levels to produce visible lines.

Payne’s first calculations showed that over 90% of the atoms in the sun must be hydrogen and most of the rest is helium. In contrast, atoms like calcium, sodium, and iron have strong lines in the sun’s spectrum, but not in abundance.  Rather, as the temperature of the sun’s atmosphere, those atoms are especially efficient at absorbing photons with wavelengths of visible light.

Astronomers found it hard to believe Payne’s calculated abundance of hydrogen, helium, and other elements in the sun. The leading astronomer of the day, Henry Norris Russell, dismissed her work and encouraged her not to publish her findings. He dismissed her work as illusory. Four years later he published his own paper with the same conclusions. History credits him with the same conclusion that Payne had reached years earlier.  He especially found such a high abundance of helium unacceptable because helium lines are nearly invisible in the sun’s spectrum.  It was several decades later that the scientific community realized the value of her work. 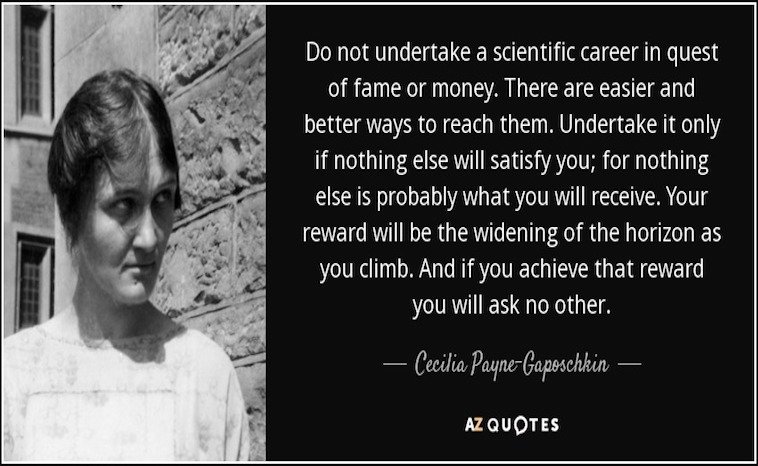 Payne-Gaposchkin remained scientifically active throughout her life. She moved to America in 1923 and spent her entire academic career at Harvard. At first, she had no official position, merely serving as a technical assistant to Harlow Shapley from 1927 to 1938. In 1938, after disappointment with her low pay and position, she thought of moving on from Harvard. Shapely managed to persuade her to stay at awarded her the title of ‘Astronomer’.  By 1956, Payne became the first woman to be promoted to full professor from within the Harvard University system. She retired in 1966 and worked for the Smithsonian Astrophysical Observatory.

With her great mind and keen observation, Cecilia Payne expanded our knowledge of the sun. Her dedication to astronomy allowed other women to pursue careers in science. We continue to study and understand more thanks to the efforts of Cecilia Payne.