For years astronomers believed that a violent explosion ended the life of a star. What happens though when they catch the same star exploding twice? Read on to find out more about the star that exploded twice.

All over the sky, astronomers find beautiful nebulae that were puffed gently into space by dying stars. In addition, astronomers occasionally see a star appear in the sky. These stars grow brighter, then fade away after a few weeks or a year. This new star may be a nova or a supernova. The eruption of very old dying star defines a nova. A supernova is an aging star that meets a violent explosive death.

Modern astronomers find a few novae each year, but supernovae are so rare that there is only one or two each century in our galaxy. Astronomers know that stars die because they occasionally see supernovae flare in other galaxies and because telescopes reveal the remains of stars that have already died.

The Explosion of a Star

How does a star explode and then explode again fifty years later? That is what an international team of astronomers is working to find out after observing this inexplicable event. The star, known as, iPTF14hls, not only exploded in September of 2014, it appears that it exploded in 1954 as well. 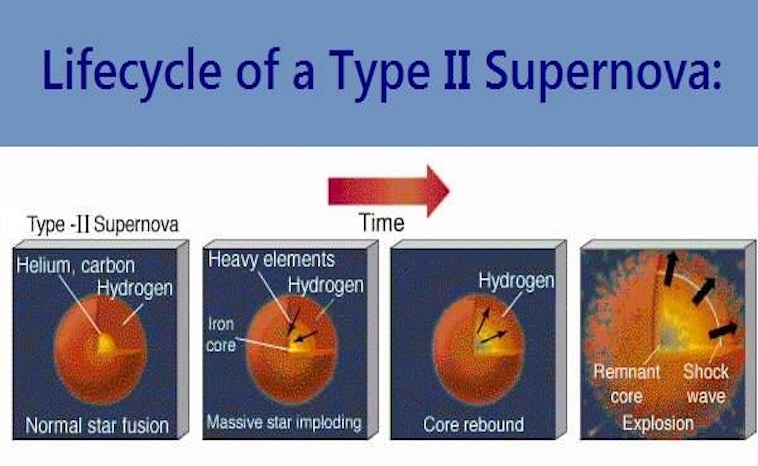 In studying supernovae in other galaxies, astronomers have noticed that there are a number of different types. Type II supernovae have spectra containing hydrogen lines. Therefore, scientists believe they develop by the collapse and explosion of the massive star. The outer layer of the star, rich in hydrogen, produces the hydrogen lines.

The light given off by the 2014 event was analyzed in order to understand the speed and chemical composition of the material ejected in the explosion. This analysis indicated that the explosion was what’s called a type II-P supernova, and everything about the discovery seemed normal. Strangely enough, a few months later the supernova started getting brighter again. Type II-P supernovae usually remain bright for about 100 days, but iPTF14hls remained bright for more than 600!

Movies and television promote the idea that an explosion in space makes noise. Space is a nearly perfect vacuum, and sound can not travel through a vacuum. Supernovae explosions are among the most violent events in natures, but they are silent.

How did astronomers detect the second explosion? An instrument built by Carnegie Science Institue Nick Konidaris was key to analyzing the light emitted by iPTF14hls, which dimmed and brightened at least five times over three years. Called the SED Machine, Konidaris’ tool rapidly classifies supernovae and other short-lived astronomical events. With the help of his machine, Konidaris captured an event that astronomers did not believe could happen. As a result, research into why the star exploded twice will now take precedent.

What happened during the first explosion that allowed the star to explode again? Did the star partially explode the first time? Astronomers will have to go back and look at their theories regarding Type II Supernovae because this star no longer fits into their previous conclusion. Stellar explosions teach astronomers a great deal about the origins of much of the material that makes up our universe. With new machines and better technology, we may someday know why this Supernovae exploded twice.