Alpha Centauri is the closest star system and closest planetary system to Earth’s Solar System at 4.37 light-years from the Sun. Could a small spacecraft reach this system in our lifetime? Read on to learn more about a recent report saying, “yes,” we can reach Alpha Centauri.

Traveling to Alpha Centauri is approximately the same as making 6,800 trips to Pluto. That’s why Russian-American billionaire Yuri Milner developed the Breakthrough Initiatives program in 2016. He wanted to find a way for a manufactured vehicle to reach the star system during his lifetime. Mr. Milner has experience working in the space industry. As a result, he knows what technology would be needed for such an endeavor. As the former director of the NASA Ames Research Center, he and other experts have developed a plan. They call it Breakthrough Starshot.

The plan for Breakthrough Starshot calls for a gram-scale nanocraft equipped with tiny sensors, thrusters, a camera, and a radio antenna. This nanocraft would be towed by a meter-scale lightsail that measures 4 x 4 m (13 x 13 ft) and is accelerated by a 100 gigawatts (GW) laser array. This would allow the spacecraft to achieve velocities of up to 20% the speed of light, allowing it to make the journey to Alpha Centauri in just 20 years. However, it’s a monumental engineering challenge that will require huge leaps in technology for spacecraft design, propulsion, and communication.

“This is addressing one of humanity’s fundamental questions: Are we alone?” says Breakthrough Starshot Executive Director S. Pete Worde. He ran the NASA Ames center in Mountain View, California, for nine years. “If we find a life-bearing planet orbiting nearby stellar systems, that’s one of the most fundamental discoveries of all time.”

Scientists from Australian National University developed a design for a directed-energy array made up of millions of individual lasers positioned across the Earth’s surface. According to researcher Dr. Chathura Bandutunga, lead researcher, the mission would need 108 ground-based arrays acting in concert. Furthermore, lasers also solve the problem of needing fuel for propulsion. Based on the mileage to Alpha Centauri, Rockets carry their fuel and would eventually run out of fuel. A laser, focused on the nanocraft solves the fuel issue. Researchers believe that focusing the laser on the nanocraft for a few seconds could accelerate it with 60,000-G forces. (The Earth pulls you to the ground with a force of 1G.) 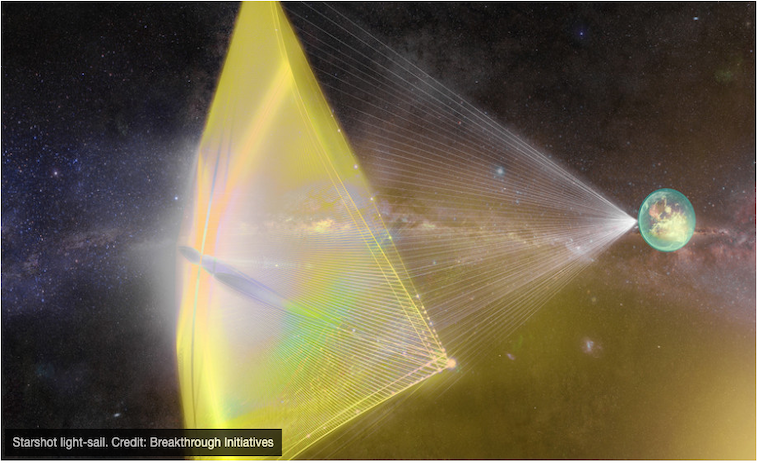 However, the project does not come without problems. The first problem comes with the amount of energy needed to power the lasers. For example, the lasers would need 100 gigawatts, the output of about 100 nuclear power plants. The second challenge is building a lightsail material that won’t vanish into a puff of ash when hit by that massive laser beam. “Even if one-ten-thousandth of the laser energy is absorbed, it’ll burn,” said Avi Loeb, leader of Harvard’s Astronomy Department and the Breakthrough Starshot Advisory Committee. Third, researchers need a way to send back information from the nanocraft to Earth. Starshot researchers believe the same laser array that accelerates the nanocraft can work in reverse to receive a returning laser signal.

Not related to moving the nanocraft through space, researchers believe they may have a political problem as well. Aiming lasers into space may upset nations that have satellite communication systems in place. A laser could easily knock out their satellites and leave them open to attach. Therefore, they believe that a multi-country team would have to approve all laser deployments.

Currently, the project is working on funding laser research. There is no known time frame for a launch.