NASA recently reported blue clouds over Antarctica? What caused the clouds to turn blue? Read on to learn more.

What makes cloud white? Water droplets and ice crystals coalesce, or join together, to form clouds. Atmospheric particles that scatter more blue light than other colors make the sky blue. The tiny cloud particles equally scatter all colors of light, and when combined make up white light.

Where do the blue clouds come from? These ice clouds form in the layer of the atmosphere called the mesosphere. The lower boundary of the mesosphere starts about 31 miles (50km) above Earth’s surface and reaches as high as 62 miles (100km). Also known as Earth’s highest clouds, they are made of ice crystals and seeded by fine debris from disintegrating meteors. The noctilucent clouds require water vapor, dust, and freezing temperatures to form. 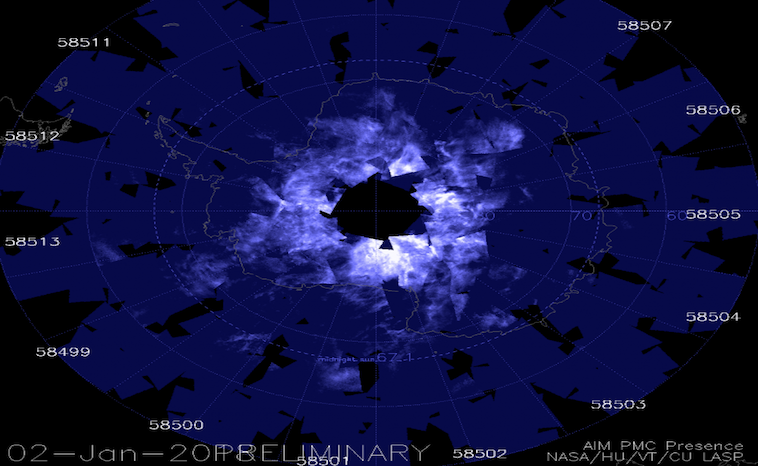 The sky over Antarctica glows with these electric blue, noctilucent clouds from November to April.

“Noctilucent-bioluminescent; visible or glowing at night”

NASA used their AIM spacecraft to capture the image. The Aeronomy of Ice in the Mesosphere craft monitors clouds for the whole Earth.  The season for night-shining clouds in the Southern Hemisphere is November to April. However, the season for the noctilucent clouds runs from May to September in the Northern Hemisphere.  In both hemispheres, they happen when it’s summertime. During this time water vapor wafts up into the high atmosphere, providing the moisture needed to form these spectacular ice clouds at the edge of space.The electric-blue glow comes from sunlight shining through the high clouds.

Cora Randall, a member of the AIM science team at the University of Colorado’s Laboratory for Atmospheric and Space Physics, said:
“The current season began on November 19. Compared to previous years of AIM data, this season seems to be fairly average, but of course one never knows what surprises lie ahead, particularly since the southern hemisphere seasons are so variable.”

Blue Clouds at Sunrise or Sunset?

They can appear as featureless bands, but frequently show distinctive patterns such as streaks, wave-like undulations, and whirls. As a result, they are often confused with cirrus clouds. They are best seen when the Sun is between 6° and 16° below the horizon. In addition to studying these mystifying clouds, the AIM mission — operated by NASA’s Goddard Space Flight Center in Maryland — strives to help scientists better understand the connection between the mesosphere and other parts of the atmosphere, weather, and climate.

Whether you live in the Northern Hemisphere or the Southern Hemisphere you may be able to observe these magnificent clouds. They are unusual phenomena occurring in the sky above us.