Scientists have discovered an asteroid that acts like a comet. Read on to learn more about Phaethon 3200.

Phaethon derives its name from the son of the Greek god Helios. Phaethon droves his father’s chariot for one day. However, he lost control of the horse and almost set the Earth on fire. In December of 2017, Phaethon made its closest approach at 6.4 million miles (10.3 million kilometers). When compared to the moon, it remains relatively far away. The moon is 27 times closer to the Earth than when Phaethon approached last year. In any case, we do not have to worry about it getting so close, because it will not orbit any closer until 2093. What makes the asteroid blue?

When the researchers viewed the object using telescopes in Hawaii and Arizona,  they found that it reflected more sunlight in the wavelengths that correspond to blue light. Most asteroids reflect a red or dark grey color.

As its orbit brings it closer to the Sun, the surface heats up to an impressive 800 degrees Celsius (1500 degrees Fahrenheit)  A graduate from the University of Arizona noted that its surface metals turn to goo at those extreme temperatures. 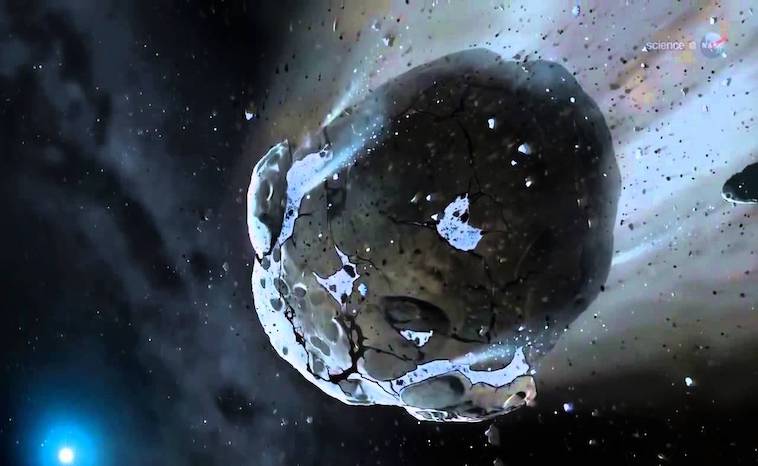 What causes the asteroid to shed some of its layers? As the asteroid passes Earth’s orbit, bits and pieces of it break away. Consequently, the debris falls into Earth’s atmosphere. Once into the atmosphere, it burns and appear as bright flashes, known as the Geminids meteor shower. You can view these meteor showers each year in December. Wouldn’t this debris tail then classify this asteroid as a comet? Due to the fact the tail only appears as it gets closer to the sun, they do not classify it as an asteroid. Do scientists know of other blue asteroids?  There is only one other object, 2005 UD found so far that is blue. Incidentally, it also displays both as a comet and an asteroid.

Scientists want to know where Phaethon originated and what it comes from? They believe it may have broken off from another blue asteroid named Pallas. As one of the largest asteroids in the Solar System, this may answer where Phaethon and 2005 UD originated. On the other hand, Phaethon appears darker than Pallas. Would it be possible for a darker object to originate from a lighter object? Scientists also point out that Phaethon has half the reflective attribute as Pallas does.

The Japanese plan to study Phaethon in the 2020’s. Their mission spacecraft, Destiny Plus, plans to flyby Phaethon and study other minor objects originating from the “rock comet.” It will take the Japanese 1.5 years to leave low Earth orbit. After flying by the moon, it will be able to reach the part of the solar system that Phaethon flies through.

It will be interesting to learn more about the asteroid Phaethon in the coming decade.