You probably know by now that our Earth is not the biggest planet. Compared to our sun we are quite small. Did you know that there are several other stars that are larger than our sun? Read on to learn more about one of these stars. Then be sure to look in the night sky and find it glowing orange.

When we encounter large objects like mountains, super oil tankers, and skyscrapers we are impressed with their scale. When we look at the mass of our sun we know that 1.3 millions Earths can fit inside. That number can seem pretty hard to wrap our head around. We try to imagine the massive planets such as Jupiter, 86,841 miles in diameter, or Saturn, 72,367 miles in diameter. Then we know that the diameter of the earth is a mere 7917 miles in diameter. It really gives us perspective on how small we really are. A speck of sand in size compared to these giant planets.

Our sun’s diameter measures 864,000 miles. That is 10 times the diameter of Jupiter. Now try and imagine a star bigger than ours. Do you think one exists?

Meet Betelgeuse. A star much larger than our sun. Astronomer Sir John Herschel named the star in 1836.  Located in the constellation ORION, at his right shoulder, this massive Red Supergiant takes 8.4 years to turn on its axis. Unlike our Sun, Betelgeuse does not have a defined sphere. It stretches in several directions and appears to have five large gaseous bubbles forming from its center area. 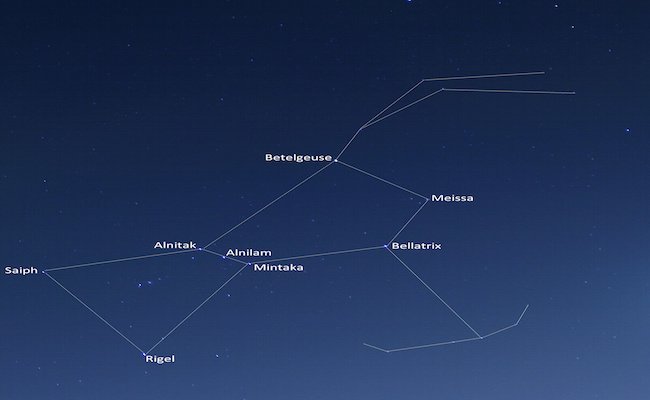 Due to its massive size, Betelgeuse has exhausted its natural supply of hydrogen. Over the past 15 years it has shrunk 15%.  It is now creating nickel and iron in its core and these elements are heavier. Within a few hundred thousand years, the star will run out of fuel, and eventually collapse under its own weight. It will then explode into a Supernova and send material out through space. Since Earth is so many light years away, we will see the light from the explosion, but will not feel the effects.

What other stars can you find bigger than Betelgeuse? What constellations did you find them in? Learning about super massive stars is exciting, so be sure to share what you have learned with friends and family.