Almost 50,000 years ago a large meteorite slammed into northern Arizona. Read on learn more about the crater it left behind and what scientists have discovered.

In the United States, a region exists where four states come together in one corner. The states of Arizona, Utah, Colorado, and New Mexico meet at a region called The Four Corners. Aside from the Four Corners, this area is part of the Colorado Plateau. The desert region extends into Northern Arizona where another famous landmark exists. The Barringer Meteor Crater breaks the smoothness of the plateau with a deep impact crater formed 50,000 years ago.

American settlers heading west originally discovered the crater and named it Canyon Diablo after the town of Canyon Diablo, Arizona. They thought that the crater formed from a volcano. However, that idea was replaced by a paper written in 1891 by the mineralogist, Albert E. Foote. He had received a rock from a railroad executive who wanted the stone analyzed. Upon further investigation, Foote discovered that the rock came from space as a meteorite.

This spurred a team of scientists to investigate the crater further. Upon measurement and research, they discovered the following. 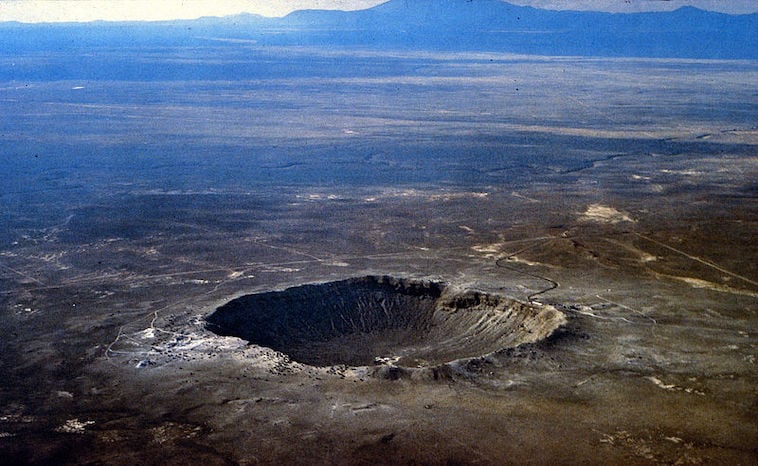 In 1903, Daniel Barringer, owner of the Standard Iron Company acquired the 640 acres surrounding the crater. Barringer believed that the crater came from the impact of a large iron-metallic meteorite. Unfortunately, he could not find enough evidence to prove his theory. However, this did not deter Barringer from trying to find the original meteor. He believed that the meteor remained intact. Back then scientists did not know that a meteor disintegrates after impact. He spent 27 years trying to locate a large deposit of meteoric iron. He drilled 1,375 feet into the crater but did not find anything.

In 19760, a man by the name of Eugene Shoemaker proved Barringer’s theory. He found the mineral coesite and stishovite. These minerals come from quartz rocks that form under severe pressure. This is the kind of pressure that only a nuclear bomb or meteor impact could create.

Before the desert we see today, the Colorado Plateau was home to a woodland forest. Researchers believe that large mammals such as mammoths, sloths, bison, and camels roamed the land. Furthermore, they think that horses and tapirs also lived in the area. The 20 to 40 megaton blast would have ejected rock 1-2 km and produced winds of 1000 km/hr. At this speed, the winds would have stripped away grass and flattened and trees within 19 km of the impact. Animals living within 14 km of the impact would have died from either the impact or the after effects. However, it did not cause the extinction of any animals, just a short term impact on their living near the crater. At one time, they believe that water filled the crater.

In the 1960s and 1970s, NASA used the crater to prepare astronauts for the Apollo mission to the moon. The rocks that have been recovered have been sent to museums across the country. One rock, the fifth largest recovered, is at the Carnegie Science Museum in Pittsburgh, Pa. The iron-nickel meteorite weighs 746 lb (340kg).

Today, the crater is owned by the Barringer family and exists as a museum attraction. They have a 1,406 lb (638kg) meteor on display and observation areas to view the crater. Guided tours of the rim are offered.