A new company wants to take you on a tour into Earth’s stratosphere onboard a hot air balloon. Read on to learn more about this amazing experience.

Imagine floating high above the Earth in a hot air balloon. If given an opportunity, would you take that trip? A new company named Space Perspective wants to offer balloon rides into Earth’s stratosphere. Not only do they want to send paying customers, but research payloads as well. They plan to start taking people into space in 2021.

What can one expect from a balloon ride into space? For about $125,000, a passenger can expect a 6-hour flight onboard Spaceship Neptune. The balloon will launch from the old Shuttle Landing Facility at NASA’s Kennedy Space Center (KSC) on Florida’s Space Coast. The first portion of the trip will take two hours to fly high into the stratosphere. Then it will move along in Earth’s winds for two hours. Finally, it will descend, and that will take about 2 hours. The total flight time will be about six hours.

Winter flights will head east out over the Atlantic Ocean. However, during the summer, it will head west over the Gulf of Mexico.

Space Perspective wants to bring an amazing space experience to people from all over the world.

“We’re committed to fundamentally changing the way people have access to space. We want to perform much-needed research to benefit life on Earth. Furthermore, we want to affect how we view and connect with our planet,” said Space Perspective founder and co-CEO Jane Poynter.

Spaceship Neptune will allow this by giving passengers a comfortable viewing area. The craft will feature seats, a bar, a bathroom. Furthermore, huge windows will allow great views of Earth against the blackness of space, company representatives said.

The Spaceship Neptune capsule will spend about two hours getting up to a maximum altitude of about 100,000 feet (30,000 meters. This is accomplished by a 650-foot-tall (200 m) balloon filled with buoyant hydrogen. After the tour ends, the capsule will splash down into the ocean. The capsule can be used multiple times. However, each launch will need a new balloon. The company states that it will not use helium for lifts. This is because it is hard to get because of medical use and rocket launches. 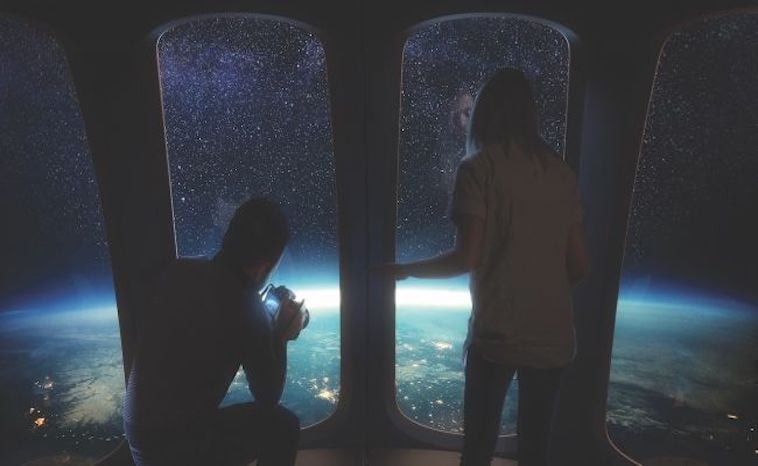 Those who may not obtain the funds needed to fly may be able to travel still. A non-profit company named Space for Humanity offers to help through the Citizens Astronaut Program. It will pay for the flights of selected folks who will serve as space ambassadors after they return to Earth. People who have the funds currently may sign up early to secure a spot.

“Today, it is more crucial than ever to see Earth as a planet, a spaceship for all humanity and our global biosphere,” Poynter said. They believe that everyone should be able to see the Earth from Space. Would you want to gently ride above the Earth in a space capsule pulled along by a balloon? It would undoubtedly be a once in a lifetime experience!!