What kind of machine would it take to travel back in time and see dinosaurs or the Earth forming? Astronomers are modern day time travelers. Read on to learn more about time traveling through astronomers’ eyes.

Someone who becomes an astronomer also carries with them the ability to time travel. You may wonder what machine they use to look back in time. Can they use a spaceship to travel back in time? As exciting as that might sound, a spacecraft cannot take them back in time. However, a simple telescope can make astronomers or practically anyone a  time traveler.

Light is a fantastic part of our world. It allows us to see the objects around us, so we don’t walk around bumping into things like trees. Where does the light come from? Our Sun provides light for the Earth. Each day, the light coming from the Sun takes eight minutes to reach the Earth. That means if you look out to the Sun (using special sunglasses), you are seeing the Sun as it was eight minutes ago. It takes light time to travel from the Sun, which is 93 million miles from Earth. If you looked at Saturn or Jupiter on a clear night, you would be seeing them as they appeared many hours ago.  Congratulations! You have looked back into the past and have become an official time traveler. Let’s look further back in time. 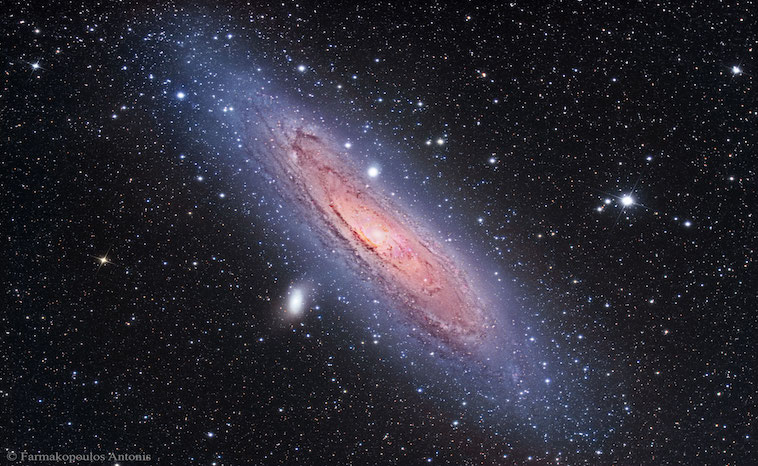 Going further back, we reach the Andromeda Galaxy. This galaxy lies 2 million light-years from Earth. Again, traveling at the speed of light, it would take an astronaut 2 million years to reach the galaxy. When looking at Andromeda, you are seeing the light from 2 million years ago. What was happening on Earth 2 million years ago? By that time, the dinosaurs had gone extinct, and humans started to move into China.

Time Traveler: The Formation of Universe

Astronomers can look back even further than 2 million years. The light they capture now with advanced telescopes comes from billions of years ago. As a time traveler, you could see about thirteen billion years back to the near beginnings of the galaxy. This area of space has not yet developed the galaxies that are common around us. These galaxies, the ones billions of years away, have black holes and explosions. Using microwaves, astronomers can detect lots of hot hydrogen gas. Every direction they have pointed their telescope, the results remain the same. The area billions of light-years away basically looks like the surface of the Sun. The formation of individual stars has not yet occurred. It will take a long time for new stars to form.

The ability to travel through time comes under the job title of an astronomer. Maybe one day, if you are interested in astronomy, you too can become a time traveler.

A rescue mission for the ISS cosmonauts: Soyuz MS-23