Do the stars in the sky move? How can we tell if they are or not? Read on to learn more about astrometry.

Astronomers have studied the positions of the stars in the sky for thousands of years. Tracking the position and movement of the stars is known as astrometry. In 190 B.C. Hippocharus cataloged more than 850 of the brightest stars he could see. While doing so, he developed the brightness scale that astronomers still use today.

His student Ptolemy used the catalog to create his essential document, the Almagest. In this catalog of 1,022 stars, he made a case for an Earth-centered universe. He positioned the moon, sun, and planets around the Earth in a perfect concentric pattern. Of course, we know that he had the Earth in the wrong position, but his tables were very accurate.

In his book, Fixed Stars, Abd al-Rahman al-SufiIn described the positions and location of over 1,000 stars. From here on, the famous astronomer Tycho Brahe used these charts to calculate more star positions.

During the late 1500’s Tycho improved upon the mural instrument to gain accuracy in his work. A mural instrument is an angle measuring device mounted on or built into a wall. As a matter of fact, the walls were constructed to lie precisely along the meridian. Brahe’s mural quadrant was one of the largest astronomical instruments of its time. Each degree could be finely divided and accurately read. As a result, Brahe achieved the greatest accuracy ever recorded up to a point. The invention of the telescope eventually gave better results. Records tell us that he used instruments mounted to the roof. 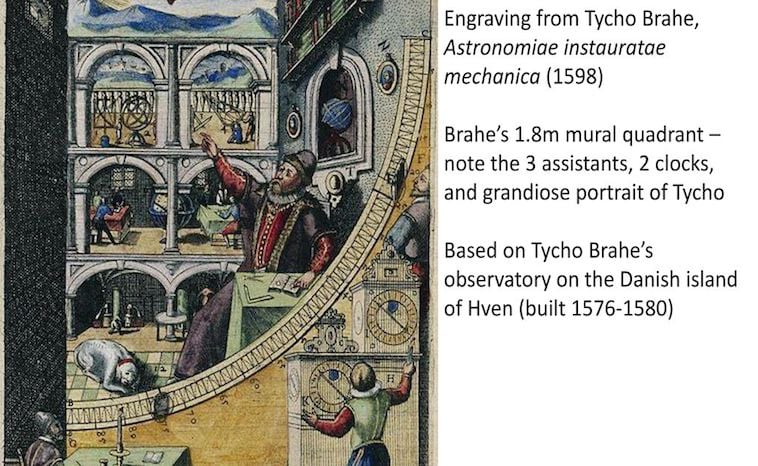 In 1807 Friedrich Bessel made the first measure of stellar parallax. Astronomers estimate the distance of nearby objects in space by using a method called stellar parallax, or trigonometric parallax. They measure a star’s apparent movement against the background of more distant stars as the Earth revolves around the sun. This method uses geometry to measure distance instead of physics.

In 1989, the European Space Agency launched an orbiting telescope called Hipparcos (named after Hipparchus). Its primary purpose was to measure stellar distances using parallax with an accuracy of 2–4 milliarcseconds (mas). According to their website, “ESA’s Hipparcos satellite pinpointed more than 100,000 stars, 200 times more accurately than ever before.” They were able to determine distances of stars out to 100 pc with an accuracy of plus-or-minus 10 percent.

The European Space Agency launched Gaia into Earth’s orbit in 2013.  ESA describes it as “an ambitious mission to chart a three-dimensional map of our galaxy, the Milky Way, in the process revealing the composition, formation, and evolution of the galaxy.” They want to obtain the distances of 1 billion stars. Incidentally, the 1 billion stars make up 1 percent of all the stars in the Milky Way galaxy. They believe they can use parallax measurements with an accuracy of 24 microarcseconds.

The constellations we see today as the Big Dipper will be hardly recognizable in a couple of hundred thousand years. Thanks to the work of early astronomers we have better tools available today to measure these movements.