Asteroids have hit the Earth for thousands of years. The whole Earth is peppered with craters. NASA is working to bump an asteroid to prevent it from hitting the Earth. Do you think it will work? Read on to find out how it works.

“It exploded in a flash 10 times as bright as anything we’ve seen before. Anyone looking at the Moon at the moment of impact could have seen the explosion – no telescope required.”

On July 7th, 2017 an 88 lb. (40 kilos) asteroid struck the surface of our moon with the explosive power of 10 cruise missiles. The 56,000 mph collision put off enough light as a magnitude 4 star. Anyone looking at the moon at that moment would have seen the explosion with his or her naked eye.

If the same asteroid had hit the Earth, the crater would reach 65 feet (20m) deep. Fortunately, Earth’s atmosphere protects us from most asteroids, as they burn up before reaching the surface.

Asteroids orbit in the same direction of the sun. Their approach to Earth is therefore quite slow. As it approaches, the Earth’s gravity pulls it in, and makes it accelerate. Factors such as shape and size determine how fast it will fall. A perfectly round asteroid will fall faster than an odd shaped one. As of 2016, the number of discovered near-Earth asteroids totaled more than 15,000. An average of 30 new discoveries are added each week. The 15,000 milestone, reached on October 13, 2016, marks a 50 percent increase in the number of known near-Earth asteroids since 2013, when discoveries reached 10,000 in August of that year. NASA scientists are concerned about an asteroid striking the Earth and want to figure out a way to prevent that.

Asteroid Hits From the Past

Ever since Earth formed about 4.5 billion years ago, asteroids and comets have routinely slammed into the planet. The most dangerous asteroids are extremely rare, according to NASA.  An asteroid capable of global disaster would have to be more than a quarter-mile wide. Researchers have estimated that such an impact would raise enough dust into the atmosphere to effectively create a “nuclear winter,” severely disrupting agriculture around the world. Asteroids that large strike Earth only once every 1,000 centuries on average.  Smaller asteroids that are believed to strike Earth every 1,000 to 10,000 years could destroy a city or cause devastating tsunamis.

An asteroid on a trajectory to impact Earth could not be shot down in the last few minutes or even hours before impact.  No known weapon system could stop the mass because of the velocity at which it travels – an average of 12 miles per second. 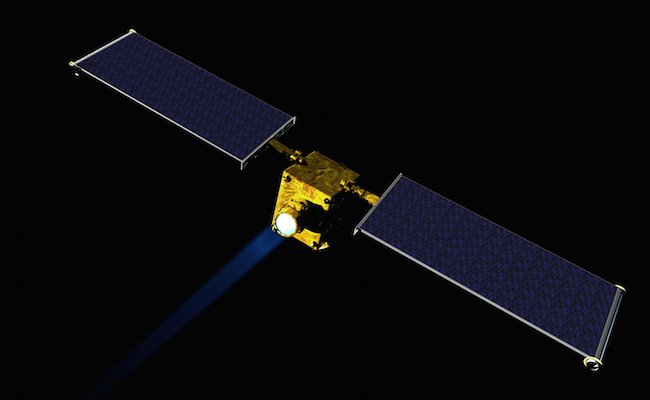 DART’s mission involves redirecting a nonthreatening asteroid. The plan revolves around crashing into Didymos B at the speed of 6 km/s, about nine times faster than a bullet. They chose this asteroid because it measures about 152 meters. Imagine a 50-story building or 1 1/2 football fields. What scientists will look at is to see if it alters Didymos B’s orbit around its larger twin Didymos A. Since they do not know much about asteroid’s internal composition, they need to perform an experiment on a real asteroid. They plan to use a kinetic impactor to know it into a different flight path.

Plans are under way to create and test the DART. It will not be ready for testing until 2024. In the mean time we will have to keep our fingers crossed that our atmosphere continues to provide protection. Hopefully the NASA scientists will have success in their efforts.