How do you know what the weather will be tomorrow? Do you know the last frost date for your area? Ancient civilizations studied the universe and calculated planting and harvesting seasons based on their observations. Read on to learn about the ancient Mayan astronomers.

The Mayan culture, began after the Olmec civilization, located in Central America about 500 B.C. They tied many of their beliefs and traditions to the celestial heavens. Ancient Mayan astronomers used mathematical accuracy when setting calendars and predicting orbits of planets.

The Mayans focused much of their attention on the Sun, the Moon, Venus and some constellations. As with most civilizations around the word, the reason for this focus related to farming. Priest-Astronomers, held the most important positions in the culture due to their ability to accurately predict growing seasons with advanced observation and charting skills. If they missed their mark, their people would die of starvation.

The Sun held the most important position in the daily lives of the Mayan people. Tonatiuh, a red eagle with a large all seeing eye was the god associated with the sun. The Mayans watched the sun, and noted the different positions as it appeared in the sky. The Earth’s tilt on its axis determines the seasons. Watching and calculating the position, the Mayans predicted a 365 solar year with slight fluctuations based on their location close to the equator. Researchers concluded that the Priest-Astronomers effectively adjusted for the fluctuation and changed the calendar based on their calculations. 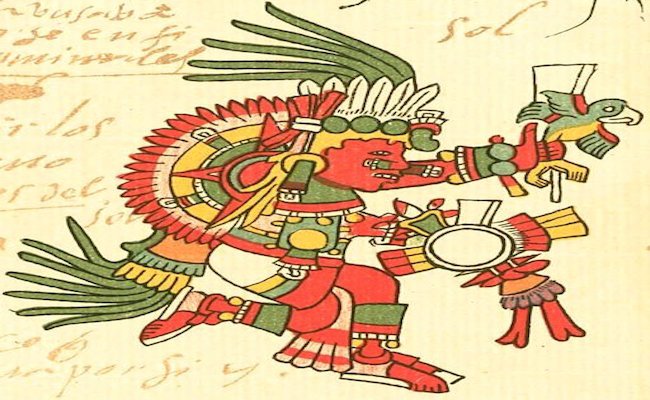 The Mayan astronomers tracked the synodic lunations, or intervals between successive full moons. By calculating 149 full moons over the course of 4400 days, their math accurately predicted a full moon every 29.53 days.  The moon, represented by a female goddess, represented through its cycles the stages coincided of a women’s life. The waxing moon represented a beautiful, ideal woman, and the waning moon an old female god who ruled over childbirth.

Correlations made between the stars in the sky and human events on earth kept the job of the Priest-Astronomers in high demand. . The Mayan people often met solar Eclipses and comets with fear. A comet meant someone of great importance may soon die. Imagine trying to understand why the earth has gone dark for several minutes once every 18 months. Spring’s arrival meant that the Pleiades and Orion’s Belt rose at sundown and vanished at dawn. Festivals marked this event and the people knew that planting season was upon them.

The Mayans views on Venus revolved around its changing positions. Known as the “Great Star,” the Mayans knew it appeared both in the morning and evening at different times of the year.  The priest-astronomers determined the synodic period of Venus to 584 days. For 250 days the planet follows the setting sun. It then disappears for eight days and becomes the “Morning Star” and rises just before dawn. This phases lasts 236 days. It then disappears for 90 days before returning as the Evening Star. Mayan culture related these events to the death and resurrection of Kukulcan, the sky god. Mayan books and monuments record this movement of Venus throughout the Mayan kingdom.

With Venus rising in the morning, the people considered it bad luck. They stayed inside their homes and blocked their chimneys from the evil light it emitted.

The Ancient Mayan Astronomers impressively charted the rotation of the Earth and Venus. Their ability to watch closely the positions of the constellations led them to successfully live for over 1000 years.