Is a site in New Hampshire an ancient structure created by the Phoenicians for stargazing? Read on to learn more about the mysteries that surround America’s Stonehenge.

Mystery Hill or America’s Stonehenge has been a source of mystery for decades. The current owners believe that the Phonecians built the site for stargazing purposes. However, scholars have debated the meaning of the structures for years. As a result, more questions have arisen instead of answers.

Located in North Salem, NH, America’s Stonehenge has a total of 14 chambers. The chambers have different designs and represent several distinctly different building periods. Surrounded by a forest, the site has an extensive collection of stone walls, rooms, passages, and standing stones. They cover an area of about 30 acres. It carries the name America Stonehenge after the famous landmark named Stonehenge in the UK. Researchers believe that stones at both sites have precise alignments to the stars.

A lack of concrete evidence leads to the controversy surrounding the site. For example, no one can say who created the site or what year people constructed the site. Why did people raise the stones and build the chambers? Robert Stone and his family took over the site in the late 1950s. They and others have conducted a thorough investigation and have made some conclusions.

Before Robert Stone possessed the land, rumors of the area referred to the site as ‘Pattee’s Caves.’  This name stems from past ownership of the ground by the Pattee families from 1734 to 1863 and again from 1902 to 1927.  The mysterious stone structures were part of the land during this time. However, some speculate that the Pattee family created the chambers. Why? That question has remained unanswered. 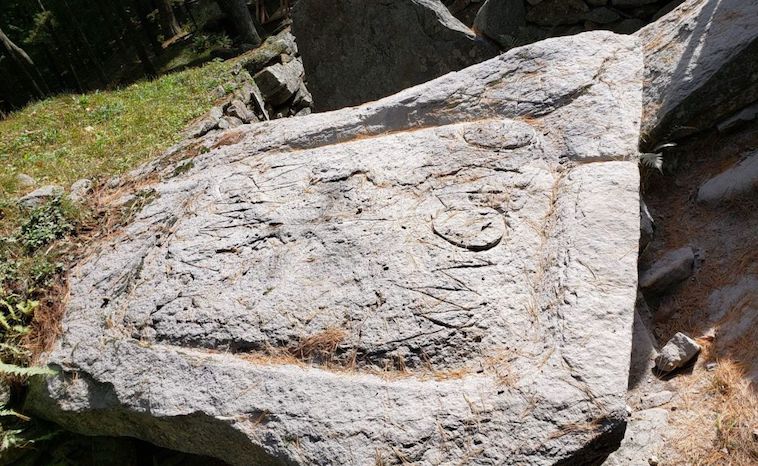 It wasn’t until 1937 when William Goodwin, a renowned antiquity collector, gave Mystery Hill’s title. From that point forward, people started taking the site seriously. Goodwin’s excavations and research led him to propose the theory that Culdee Monks traveled westward from Ireland and settled on Mystery Hill.  He based this premise on very loose research, but news of Mystery Hill spread.  This theory dated the site to before the arrival of Columbus or the Puritans.

Alignment with the Stars

In 1970, Mr. Stone attempted to look for a connection between the stones and the stars. He believed that the stones were placed in line with the different solstices. He made several attempts to confirm this point, but unreasonable weather conditions thwarted his efforts. Finally, the day of the winter solstice games. During this day, Mr. Stone witnessed that one of the rocks marked the “oncoming of brand new light.” (America Stonehenge, 2021)

For instance, the believed ‘North Stone’ of America’s Stonehenge indicates it denotes the North Star of Thuban. The North Star of Thuban was the star of the Egyptians around 2600 BC.  Carbon dating of the stone suggests that it dates back to the same period. Mr. Stone believes that some of the carvings on the stones offer ancient Phonecian visitors. However, some people disagree.

Who created and built America’s Stonehenge? Why did they build it? It remains a mystery to this day.

Alternative forms of life: The Inorganic