On June 14, 1947 a rancher discovered debris from a weather balloon 30 miles north of Roswell, New Mexico. Many people claim what the rancher found was not a weather balloon. Read on to find out what was found.

On June 14, 1947, William Brazel, a rancher found a “large area of bright wreckage made up of rubber strips, tinfoil, and some tough paper and sticks.” A month later, he heard people talking about flying discs. He went to the sheriff and told him about the materials he had found.

The sheriff called Roswell Army Air Feild and talk to Major Jesse Marcel. On July 8th, 1947 Roswell Army Air Field issued a press release. It stated that Army personnel had recovered a “flying disc,” which had crashed on a ranch near Roswell, New Mexico.  The same day, the Federal Bureau of Investigation (FBI) received a telegram from the Air Force Base in Fort Worth, Texas. A Major from Carswell Air Force Base stated in the telegram that the “flying disc” was a weather balloon that measured twenty feet in diameter. Commanding General Roger Ramey held a press conference and also stated that the objects and materials found were indeed from a weather balloon. Case closed. 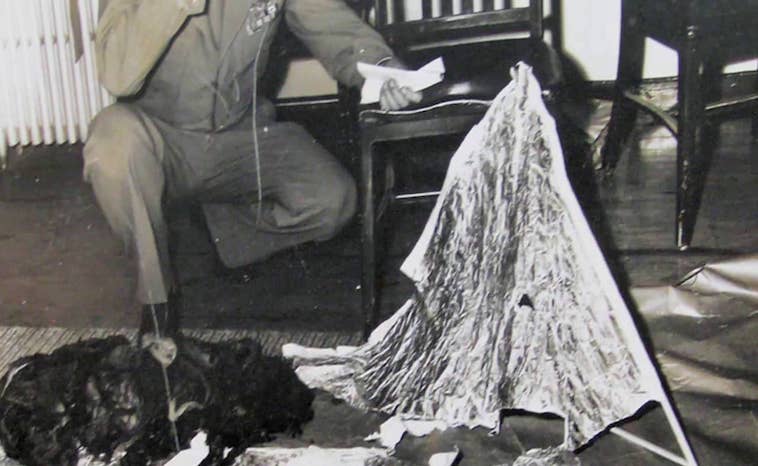 During the 1970s and through the 1990s, the Roswell incident surfaced again as people starting asking more questions. UFO researchers believed that what crashed was not a weather balloon, but instead an alien spacecraft with aliens inside. Through witness interviews and documents obtained through the Freedom of Information Act, UFO investigators made the following claim. They claimed that an alien spacecraft flew over New Mexico observing US nuclear weapons activity. While watching, alien spacecraft took damage from lightening resulting in the spacecraft crashing to Earth. Furthermore, they believe that the Air Force found alien bodies at the crash site.

Many books were written, each claiming that the eyewitnesses they interviewed backed up the alien spacecraft story. Unfortunately, with so many stories from so many witnesses, the Roswell incident became an absurdity. Although hundreds of witnesses were interviews, very few claim to have seen debris or aliens. The lack of evidence other than the tiny bit of debris found did not trouble UFO believers. People were already experiencing a sense of distrust with the American government. After the assassination of President Kennedy, Robert Kennedy, and Martin Luther King, the American public did not have a lot of faith in their elected leaders being truthful.

Between 1994 and 1997 the United States Airforce fell under orders to conduct an internal investigation into the incident near Roswell, New Mexico. The reports again concluded that high altitude weather balloons created the debris found that day back in 1947. This report did not discourage UFO conspiracy theorists. More books were written, movies were made, and the tourism rate for Roswell increased. People made money selling their version of what happened near Roswell.

Let’s suppose for a minute that aliens did crash and the government covered it up. How do we account for the testimony of Glenn Dennis? He testified that authorities carried out alien autopsies at the Roswell base. Furthermore, he claimed that he and others were threatened to keep quiet about the incident. Unfortunately, UFOlogists do not believe the testimony of Glenn Dennis, because he waited so long to tell it. In addition, his story changed a couple of times as he recounted it.

On October 26, 2007, Bill Richardson made a statement that as a United States congressman he had requested information on the Roswell files. He was told that the information was classified. “That ticked me off. The government doesn’t tell the truth as much as it should on a lot of issues,” said Richardson.

Did an alien spacecraft crash near Roswell, New Mexico in 1947? On the one hand, the public may never know. On the other, maybe the public does know and refuses to believe it. Weather balloon or UFO? What do you think?