Wentian has merged with the CSS

Wentian is the second of four large modules that make up China’s Tiangong Space Station, CSS for short. Its mass of almost 25,000 kg is at the very maximum of the Long March 5B rocket’s payload.

Later this year, during October, the third large Mengtian module of almost identical mass and construction will be launched in the same way. At the end of 2023, CSS will receive the last, fourth, large Xuntian module (in nature a Hubble-class space telescope, but with much better capabilities) which will work away from CSS and only occasionally return and dock for regular checks and overhauls.

It is not excluded that in the future (2024-2026) up to two larger modules will be added, considering the construction possibilities allow it.

The arrival and reception of Wentian was overseen by three Chinese taikonauts; Cai Xuzhe, Chen Dong and Liu Yang who now reside on CSS as Crew-3. 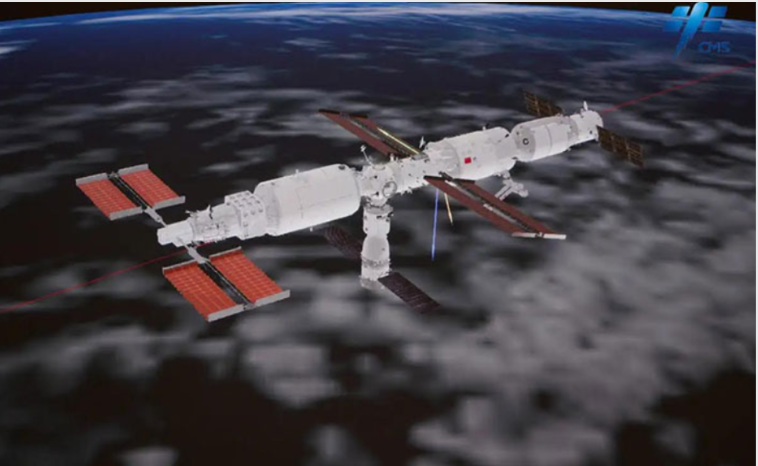 The Wentian module is 17.9 m long, and with the photovoltaic panels unfolded, the width measures a full 55 m. On it there is an external robot-arm 5m long intended for cargo manipulation outside the station (there is another, larger, 10m, robot-arm on the Tianhe central module), while inside there are laboratories for ecology, genetics, biotechnology, medicine, physics… as well as living space for the crew including three bedrooms for one taikonaut each.

The diameter of this module is 4.2m. It should be mentioned that Wentian is equipped with autonomous systems for life support and management of the entire CSS in case of need, i.e. as a backup to the primary systems located on the central module of Tianhe. The permanent crew consists of three people with the option to have six for a longer or shorter time.

Chinese taikonauts use Shenzhou spaceships for space flights and landing on CSS, transport to and from CSS is carried out by unmanned Tianzhou ships.

The trajectory of the CSS is laid somewhat lower than the ISS and at a smaller orbital angle. As a result, it is in a slightly less favorable position for observation from Europe for example compared to the ISS. In the following days, we can see it right at dawn (in a not too favorable situation). We will have the opportunity to see in mid-August how the passage of the CSS over our region will look after the arrival of the large Wentian module.

Connoisseurs of astronautics can clearly see the similarities and links between the Chinese space station and the former MIR space station, which was constructed and used by the Soviet Union in the 1980s and 1990s. The influence of Soviet, or rather Russian, technology and the transfer of knowledge along with Chinese modernization and modifications led to today’s interdisciplinary, complex, modular space station; CSS.