Where are we heading as we travel through space? We know that our galaxy is moving, but what moves us along? Will we crash into another galaxy? Read on to learn more about the Great Attractor.

We circle the sun, and at the same time, our sun moves around. In fact, our whole solar system orbits the center of the Milky Way galaxy. As the Milky Way galaxy travels through the cosmos at 2.2 million kilometers per hour, we have to ask ourselves why? Scientists acknowledge our galaxy and others are being pulled towards a specific point. Can we see that location through our advanced telescopes? What happens when we get there?

The Other End of the Galaxy

About 150 million light-years from Earth exists a force that has an enormous gravitational pull. Scientists call it “The Great Attractor.” Scientists learned of this phenomena in the 1970s but had no way to see through an area of space called the Zone of Avoidance. Edwin Hubble coined the phrase and named it that because of the absence of galaxies near the plane of the Milky Way Galaxy. Large amounts of interstellar dust prevented them from seeing anything. At that time they did not have the technology to look into that region. As X-Ray technology advanced in later years, scientists began to see objects in that region. 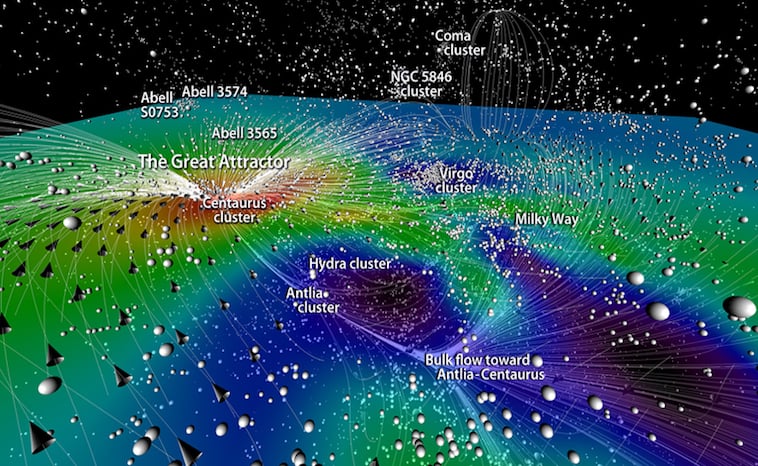 In the area of the space known as the Great Attractor sits a massive supercluster of galaxies called the Norma Cluster. It has a mass of about a thousand trillion suns. Thousands of galaxies exist here. However, this does not explain the motion of the galaxies surrounding it. Scientists admit that the mass of the Great Attractor does not account for the pull. Therefore, scientists believe that the Shapely Supercluster accounts for the attraction.

Superclusters are typically seen as long and thin strands of clusters and galaxies, intracluster gases and, presumably, “dark matter” on a two-dimensional surface, interspersed by large voids nearly empty of matter. Astronomers discovered that the galaxies in the Universe are arranged in sheets and walls surrounding large nearly-empty voids. The Shapley cluster, known as the largest cosmic structure in the local Universe, was discovered in the 1930s by American astronomer Harlow Shapley. This remarkable concentration of galaxies in the Centaurus constellation boasts more than 8000 galaxies. It contains a total mass of more than ten million billion times the mass of the Sun.  This massive structure sits within the distance of our Milky Way galaxy about a billion light-years away. We and every galaxy in our universe are moving towards it.

Australian astronomers are in prime position to further explore structure and motions in the nearby universe. Radio surveys such as CAASTRO’s 2MTF survey, which also uses the Parkes telescope to calculate galaxy distances, are already making new contributions. At optical wavelengths, the Australian Astronomical Observatory and the ANU are leading a new survey, called TAIPAN, which will target elliptical galaxies to explore more distant regions.

As we speed toward this area of space, we have to wonder what new and exciting events we will witness. What does that side of the universe contain? Will scientists discover planets closer to our planet Earth? Once we join this cluster of galaxies what exactly will change on our planet?