Let us guide you through the astronomical events of December 2020. Comparable to November, we have handpicked four mesmerizing astronomical events for this month as well! While choosing these astronomical events we have done our best to pick some fascinating that are also visible with the naked eye. However, if you happen to have binoculars or a telescope at your disposal, feel free to use them. Be sure to write down the dates of the events in your calendar! 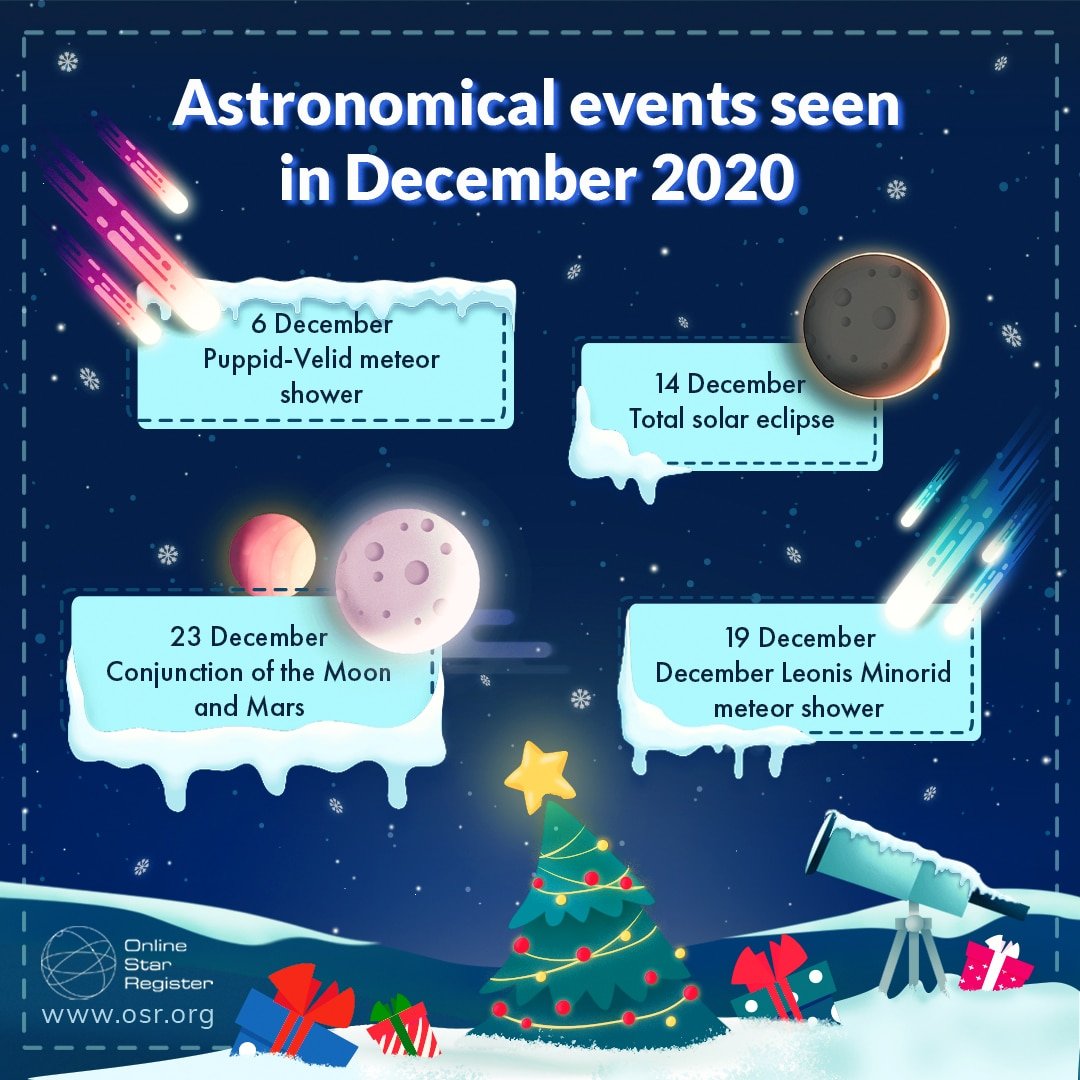 The Puppid-Velid meteor shower takes place between Tuesday the 1st of December and Tuesday the 15th of December. You are able to see the peak of the meteor shower on Sunday the 6th of December. This peak allows you to see up to 10 bright meteors per hour flying at a speed of 40 km/s. You are able to see the peak from the meteor shower’s radiant point, the constellation Puppis and Vela, when it is above the horizon. Additionally, the number of visible meteors increases as the radiant point of the constellations becomes higher in the sky.

Solar eclipses occur when the Sun, Moon and Earth are aligned in a straight line. When this happens, the Moon passes between us on Earth and the Sun and therefore blocks its light, causing a total solar eclipse. A solar eclipse always occurs about two weeks before or after a lunar eclipse. Usually, there are two eclipses in a row, but other times, there are three during the same eclipse season. The total solar eclipse of Monday the 14th of December is the second eclipse this season.

When a solar eclipse occurs, they are unfortunately not visible from the whole world. This is because the Moon is much smaller than the Earth, and the shadow it casts onto the Earth is never more than a few hundred miles across. The total solar eclipse of the 14th of December is visible from the Southern Hemisphere and especially from South-America.

The Moon passes in front of the Sun, creating a total eclipse of the Sun, visible from Chile and Argentina between 14:34 and 19:53 CET. At the same time, a partial eclipse is more widely visible from countries such as Brazil, Uruguay, South Africa, Namibia and more! Make sure to be on time when viewing this astronomical event, since it only takes about 2 minutes. Additionally, be careful when observing the sun! The Sun is the brightest object in the sky, and looking directly at it can cause permanent eye damage within seconds.

Astronomical Event #4: Conjunction of the Moon and Mars

It is time for another conjunction! As mentioned in the Astronomical events of November 2020: as the Moon and planets move along the ecliptic at different speeds, they pass each other from time to time. Therefore, conjunctions and appulses with the Moon are very common. The Moon even passes a conjunction with every planet roughly once a month! This month we will tell you about the conjunction of the Moon and Mars.

On Wednesday the 23rd of December the Moon and Mars share the same right ascension. However, we have not yet told you that a conjunction is an apparent phenomenon caused by the observer’s perspective! In other words, the two objects involved are not actually close to one another in space. So how does this work? Well, the times and details depend only very slightly on the observer’s location on the Earth’s surface. The differences are greatest for conjunctions involving the Moon because of its relative closeness to us on Earth.

We hope to have given you enough reasons to go out exploring the night sky with the astronomical events of December 2020! From the Puppid-Velid meteor shower, to the total solar eclipse, December Leonis Minorid meteor shower and the conjunction of the Moon and Mars. The night sky of December is full of Christmas magic: enjoy the season by going out stargazing!