Do you know how to interpret smoke signals like the American Indians? Can you understand Morse Code signals sent by flashlights? Scientists have been researching Alien communication and how to understand their language. Read on to find out more about talking to Aliens.

Astronomers and scientists have long spent time trying to figure out how to talk with Aliens. To date, proof of Aliens has not existed, but that has not deterred us from sending signals out into space. Various methods exist in their efforts and they base their attempts on numeric language usage. Scientists tried in the past to send out messages into space. Those attempts included Nasa’s pioneer 10 and 11 spacecraft. They carried messages written onto plaques and a record, as well as radio messages.

Were Aliens Contacting Us?

Telescopes first picked up Fast Radio Bursts in 2001. Researchers at Cornell University discovered repeated 10 millisecond-long “fast radio bursts” (FRBs) after sifting through archive data caught by the Arecibo telescope in Puerto Rico. These bursts repeatedly hit Earth in a regular pattern ever since. Carrying as much energy as the Sun releases in a month, scientists believe they come from a huge power source. Researchers know that pulsars emit bursts of radio waves but not with much regularity. Scientists recently traced the origin of the waves to a dwarf galaxy. Located more than 3 billions light years from Earth, a powerful neutron star called a magnetar may be the culprit. This massive, highly magnetic, rapidly rotating star emits huge solar flares. Not an alien, but scientists keeps searching.

How Would We Communicate?

To answer the question, “How Would We Communicate?”, with an alien life form, we have to look to the past. The assumption that Aliens hold a superior intelligence over humans, gives scientists the rationale that mathematics would facilitate the best communication. Therefore, scientists send radio waves deep into space based on mathematic principles. Their hope is that Aliens then would receive our message and send a message back. Would we understand their message?

Looking At Ancient Language for Answers

A paper written by Ben Finney and Jerry Bentley in the 2014 issue of Archaeology, Anthropology, and Interstellar Communication from The National Aeronautics and Space Administration, points to some interesting thoughts on communication with Aliens. The researchers looked at how western europeans misinterpreted hieroglyphs from the ancient Mayans and Egyptians. The believed that the hieroglyphs represented ideas as a whole and not an independent language.

“In both cases, it was not until scholars approached the glyphs as symbols for the phonemes and morphemes of speech, studied the modern languages descended from ancient Egyptian and Mayan, and discovered translation keys (such as Egypt’s famous Rosetta Stone) that they were able to decipher the hieroglyphic texts. I therefore wrote my paper as a cautionary tale for SETI scientists who believed that extraterrestrial radio messages would be readily decipherable because they would mainly be mathematical and scientific in content and form.” (2014, Finney)

Would we understand Alien communication sent to us, without a basic understanding of their language and culture? If they do not share the same biology, as the Western Europeans did with the Mayans, (both were human) then how will we know their intent? 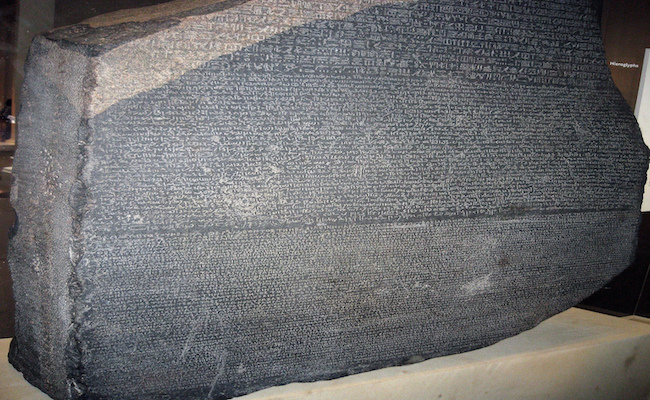 In the 1950’s a well known linguist named Sir Eric Thompson maintained that Maya glyphs did not express anything as mundane as language but,

This singlehandedly prevented researchers from pursuing any more research into the idea that the glyphs represented letters. In 1952, a Russian epigrapher named Yuri Knorozov changed that. He found through linguistic analysis and knowledge of the Mayan language that indeed Mayan glyphs stood for phonetic-syllabic signs or morphemes.  “Since then a new generation of Mayanist scholars—linguists, art historians, archaeologists, and ethnographers, as well as specialized epigraphers—have followed Knorozov’s lead and have begun to read the inscriptions with some facility and to learn about Mayan politics, wars, religious practices, and other facets of this fascinating culture.” (2014, Finney)

Not having a Rosetta stone to interpret messages sent from Aliens may leave us misinterpreting those messages. Scientists may need to implore research methods similar to linguists and anthropologists to reach the right conclusion. Although we have not truly received messages from space, when we do, let us hope that our interpretation is correct.