Scientists have known about the sun’s 11-year cycle for over one hundred years. The cycle is marked by the number of sunspots, changes in magnetic activity, and radiation level. However, these changes were always hard to predict. Scientist’s recently discovered a tsunami of events on the sun that may lead them to track the cycle.

Scientists decided to look at the surface of the sun to see if they could learn more. They went over 140 years worth of observations.  Scientists looked at bright flashes of light that go across the sun’s surface. To their surprise, the researchers found the occurrence of two events to make a cycle. The one event ended the one cycle, while a “tsunami’ of events started a new one. The bright flashes were of great interest to the researchers. They believed the bright flashes of ultraviolet light and the sun’s magnetic field drove the cycle. Furthermore, they believe keeping track of the flashes may help them predict cycles.

We have observed the sunspot cycle for hundreds of years,” Mausumi Dikpati, a scientist at the National Center for Atmospheric Research (NCAR). The journal Nature published the tsunami study in February 2019. “But it’s been a mystery what mechanism could transport a signal from the equator, where the cycle ends, to the sun’s midlatitudes, where the next cycle begins, in such a relatively short amount of time.” 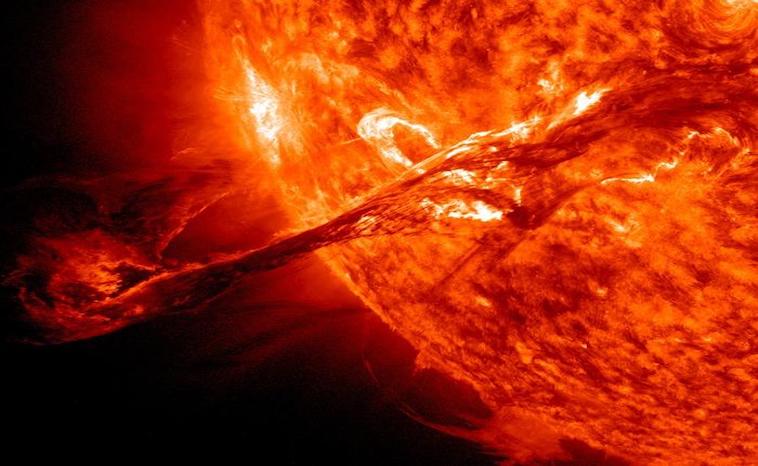 The scientists looked for markers in solar activity. They studied the movement of coronal bright points or flickers of extreme ultraviolet light in the sun’s corona. The light flickered at a higher altitude than the sunspots and then moved toward the equator.  In addition, the flickers overlapped with the sunspots in the middle before both flashes and sunspots reached the equator and disappeared. Once they disappeared, the “terminator” event, became shortly followed by a massive burst of activity in the flickering lights.

Another study, published in July 2019, in the journal Solar Physics added additional information to the first study. The second study suggested that the bright flicker of light marked the movement of the sun’s magnetic field. It also stated the location of the magnetic fields. The research indicates that these fields wrap around the sun like rubber bands on the east and west. Near the end of a solar cycle, the bands move toward the equator.

Furthermore, the fields also trap plasma. As they travel, the plasma moves along. Once the fields reach the center, then the opposing charges of the magnetic fields collide. The fields move from the east to the west and collide with each other. This collision releases the trapped plasma and magnetic charge in a fluid-like motion. The rush of fluid was what researchers called a “tsunami.” Once the tsunami of solar plasma reaches the middle of the sun, it encounters the magnetic field of the next solar cycle. When they meet, they collide and have a bright flickering light.

How will scientists test their theory? The current solar cycle comes to an end in the first half of 2020. Once a new one begins, they will use the Parker Solar Probe and the Solar Dynamics Observatory to look at the sun. Success in putting their theory to the test will result in scientists predicting sun cycles.