Just looking thru a telescope does not tell us much. As a result, a star seems like a point of light. At the same time, a planet looks like a little disk. A galaxy looks like a hazy patch. To use a research telescope to learn about the universe, scientists use special tools in conjunction with the telescope.

Present-day astronomers use charge coupled devices (CCDs) as both image recording apparatus and photometers. A CCD is a specialized computer chip containing millions of microscopic light detectors arranged in an array about the size of a postage stamp. Consequently, the CCDs have replaced the photometer. Their advantage lies in the fact that they can capture both bright light and faint objects in a single exposure. 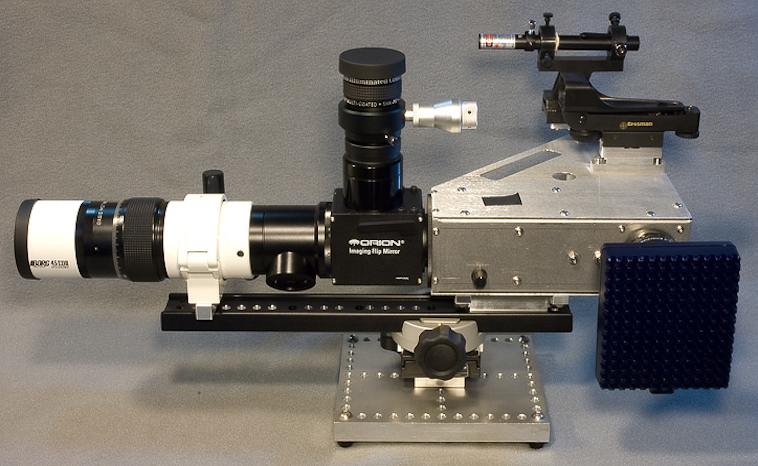 To analyze light in detail, astronomers spread out the light according to the wavelength (color). This function is performed by a spectrograph. Sir Isaac Newton conducted an experiment in 1666 showing how a spectrograph works. Newton bored a small hole in the window shutter of his room to admit a thin beam of sunlight. When he placed a prism in the beam, it spread the light into a beautiful spectrum that splashed across his wall.

The spectrum of an astronomical object can contain hundreds of spectral lines. As a result, the dark or bright lines cross the spectrum at specific wavelengths. Scientists understand the details of how light interacts with matter. Consequently, a spectrum carries a tremendous amount of information. This makes the spectrograph the astronomers’ most powerful tool.

Active optics is a technique to adjust the shape of telescope optics slowly. As a result, this compensates for effects of changing temperature as well as gravity bending the mirror when the telescope points at different locations in the sky. Adaptive optics is a more sophisticated technique that uses high-speed computers to monitor the distortion produced by turbulence in Earth’s atmosphere. The computer also rapidly alters some optical components to correct the telescope image. The resolution of the image has limitations due to the diffraction in the telescope. Furthermore, by removing much of the seeing distortion, it produces a dramatic improvement in the detail that is visible.

One of the reasons astronomers build big telescopes is to increase resolving power. They have achieved very high resolution by connecting multiple telescopes to work as one single giant telescope. This method of synthesizing a “virtual” large telescope from two or more smaller telescopes is known as interferometry.  The light from the separate telescopes must be brought together and combined carefully. The path that each light beam travels cannot vary more than a fraction of the light’s wavelength. Turbulence in Earth’s atmosphere continually distorts the light. As a result, high-speed computers must continuously adjust the light paths.

With powerful tools and instruments added to their telescopes astronomers have managed to discover far more about the universe. New technology each year will help them to learn more. This knowledge will aid in our ever-increasing understanding of the universe.