Pyramids of Giza and Orion’s Belt

Graham Hancock has been described as an unconventional thinker. A native of Scotland, he is a journalist for many British newspapers including the Times and the Guardian. In 1995 Graham wrote a book titled Fingerprints of the Gods, which explains, in theory, the origins of ancient civilizations. One of the topics Graham covers in his book revolves around the pyramids of Giza and their relationship to the stars in the sky. The information covered in this article is based on information from Hancock’s book.

With precision and an eye to the sky, the great builders of the pyramids replicated Orion’s belt on the sands of Egypt. We know from old religious writings, that the ancient Egyptians believed that the gods descended from the belt of Orion. Furthermore, that Sirius (the brightest star in the sky) and these gods took the form of human beings. As a result, Orion became associated with the god Osiris. Sirius associated with the goddess Isis. Together they created all of the human civilization.

Their size and placement also take into account both the visible brightness and location of the stars within Orion’s belt. Consequently, the two larger pyramids line up perfectly in comparison to the smaller offset pyramid of Menkuare. 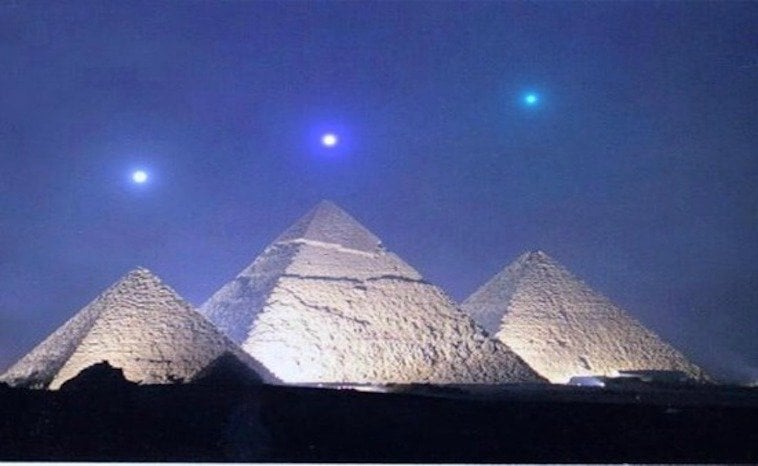 What about the movement of the stars due to axial precision? Axial precision refers to the gravity-induced, slow, and continuous change in the orientation of an astronomical body’s rotational axis. Furthermore, it cycles every 26,000 years. This is the phenomenon that alters the declination of all visible stars from Earth “Thus from its highest point at the meridian transit it takes the stars of Orion’s belt about 13,000 years to descend to the low point, last registered in 10,450 BC, that is immortalized in stone on the Giza plateau. As another 13,000 years pass, the belt stars very slowly rise again until the belt is back at 58 degrees again,; then during the next 13,000 years they gradually fall once more to the last point registered in 10,450 BC. This cycle is eternal: 13,000 years up, 13,000 years down, 13,000 years up, 13,000 years down, forever.”

Even with rudimentary instruments, the architects of the great pyramids managed to align the Great Pyramid to face true north. The position of the North Pole moved over time and the pyramid stayed exactly aligned. In fact, the east/west parallel that crosses the most land and the north/south meridian that crosses the most land intersect in two places on the earth, one in the ocean and the other at the Great Pyramid. While many believe there is a direct correlation between the constellation of Orion and the Pyramids at the Giza plateau, many people are unaware of the fact that the Descending Passage of the Great Pyramid pointed to the pole star Alpha Draconis, circa 2170-2144 BCE. This was the North Star at that point in time. No other star has aligned with the passage since then.

We may never know how the great pyramids came to the be aligned with such precision. We know that the architects and builders had rudimentary tools and that is what continues to fascinate our minds. The world enjoys a great mystery and the Great Pyramids have given us lots of clues and very few answers.