Do you own a map? Most people these days have a phone that helps them navigate directions. Imagine for a minute not having a map or your phone. How would you find your way to the next town? The ancient mariners used the stars, moon, sun, and planets to help them navigate the vast oceans. Read on to learn about the devices they used.

Finding one’s way on land or by sea has been the essential element to survival since the beginning of time. Knowing which paths led from one town to the next benefitted tradesman in their pursuit of selling their goods. Along the way markers and signs allowed people to move about quickly without fear of getting lost. Sailors did not necessarily have marked paths to prevent their loss of direction and possible fate of dying at sea. Navigation relied on staying close to the shoreline. They used landmarks to note their location. They shared this information with other sailors that allowed the establishment of trade routes.

The original ancient sailors knew that the best way to navigate the sea revolved around the celestial stars. If they were able to locate north and south accurately their chances of survival increased. Many devices were created throughout the centuries to aid them when crossing great seas and oceans. Leaving the shoreline to venture further out to sea using these devices opened up worldwide trade routes and discoveries of new lands.

The gnomon or sun-shadow disk operated like a sundial. Placing the disk into the water and allowing it to float allowed the user to determine his latitude by the length of the sun’s shadow cast. Oriented so that it points north and parallel to the rotation axis of the Earth, ensured accuracy. In order to read the latitude with such a device, a navigator would have had to measure the sun’s shadow precisely at noon, and the gnomic lines would have assisted with determining the time of noon. The Vikings used such a device to sail around the north Atlantic. 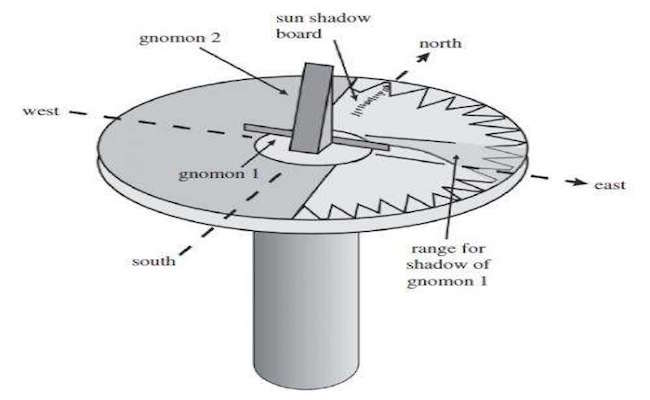 Another device used by ancient navigators, the Kamal, provided the navigator the knowledge of Latitude. The Arabs used the technique of “latitude sailing”.

The Kamal was composed of a wood or horn parallelogram one inch by two inches long. Strings were inserted through the center. The string composed of knots at different points along its length. Each knot, called an isba, equaled one degree 36 minutes. The knots ranged from 1 to 16 isba. The navigator would put one of the knots between his teeth and hold the Kamal at arm’s length. When the upper and lower edges of the device became coincident with the pole star and the horizon, the navigator knew his latitude was correct. The latitude of different ports corresponded to the position of particular knots on the string. 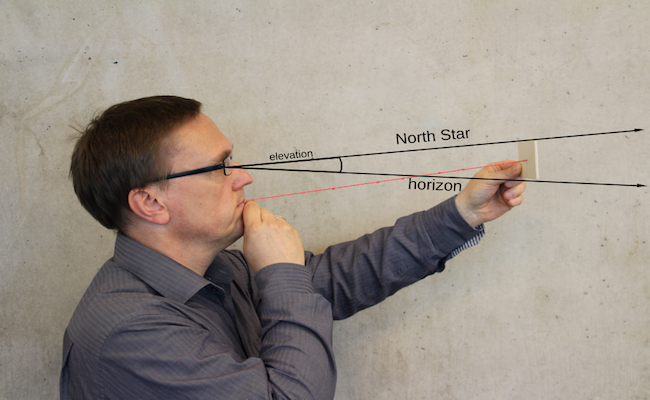 Col. Warren Davis, a celestial navigator and sailor, has used many ancient tools for navigation on passages. It is his belief that the Arab navigators would have had a small collection of kamals, each one properly labeled and with its string knotted for the labeled port or headland.  “I believe,” he writes, “that the mariners, in the course of their apprenticeship, visited many ports. At each port they could make a kamal and mark it to the right knotted string length by actual observation.” (OceanNavigator 2003)

In the Middle Ages, sailors relied on the astrolabe, a metal disc which had a scale with degrees and a ruler for measuring the height of an astronomical body. It determined the latitude of a ship at sea by measuring the noon altitude of the Sun. It also measured the altitude of a star of known declination.

“A knowledge of astronomy was considered to be fundamental in education and skill in the use of the astrolabe was a sign of proper breeding and education.”

The Mariner’s Astrolabe, used primarily in the 15th and 16th centuries, proved inaccurate by five or six degrees. This translated to the ships sailing off course by several miles.

The sextant measured the angle a star, planet, sun, or moon made at the visible horizon. As the most advanced of navigation devices, it allowed users to determine their latitude to within a sea mile or two. With some skill and practice, sailors understood the principle concept of the device and its precision. One small error though led them astray by several miles.

Navigating the open seas required the use of devices that relied on the stars, moon, sun, and planets. Mariners were able to venture across vast oceans and explore the entire planet. These devices led to the advancement of trade routes and growth of coastal cities. It is amazing to see how the stars above helped sailors for thousands of years discover the world.