Scientists know that Earths magnetic field is generated by the spinning of the magnetic core. At some point, the Earth’s poles will swap and reverse north and south. When will that happen next? Read on to learn more about Earth swapping its magnetic poles.

Every couple of hundred thousand years the Earth’s magnetic poles switch. North moves south, and South moves north. Thankfully, they do not entirely disappear. The Earth’s magnetic field protects the planet from solar and cosmic rays.

When The Poles Switch

When the poles switch, this protective shield slightly diminishes. The switching process could take centuries, and during that time, radiation would get closer to the planet. If too much radiation reached the surface, habitats would die, and species of animals would go extinct. Furthermore, the reduced protection of the magnetic field would cause orbiting satellites to fail. Satellites control timing systems on electric grids. If the satellites fail, then electric grids would shut down and immerse everyone into a blackout. Cell phone service, GPS, everything that relies on electric and satellites would cease to function. A shutdown in the power grid of more than a week would lead to chaos. 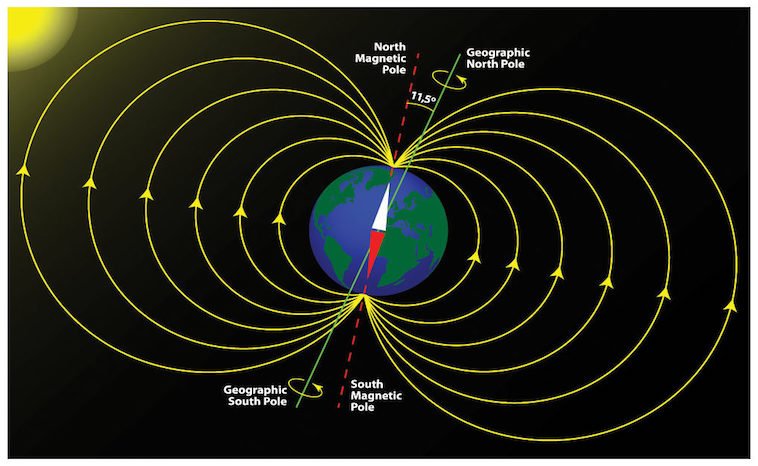 Scientists are working on new technology to prevent a complete shutdown of all the satellites and power grids in the event of a polar shift. They need this technology to deal with large amounts of radiation that will blast through as the magnetic poles decrease in their strength. Governments plan on storing energy and hope to provide backup services for companies to shore up their technologies.

To try to determine whether or not a flip is imminent, scientists have begun using satellite imagery and complex calculations to study the shifting of the magnetic field. They’ve found that molten iron and nickel are draining energy from the dipole at the edge of the Earth’s core, which is where the planet’s magnetic field is generated.

When Did The Poles Switch Last?

To get a more precise picture, scientists looked at clay from ancient pottery. This clay is also sensitive to Earth’s magnetic field. By analyzing clay from jar handles found from the ancient iron age in Judah, archeologists can see the magnetic field rising and falling over a 600 year period. The dating stamp on the jars allowed them to get a clearer picture of the magnetic strength during the 6th century B.C.E. It should in the 8th century that the field appeared stronger and then started to slip as it approached the 2nd century.

When Did They Discover Magnetic North?

During the early 19th century, scientists discovered magnetic north. Since then magnetic north has moved about 600 (966km) miles further north. It moves about 40 miles a year and has lost about 10% of its strength over the last two centuries. Not to worry though, our atmosphere is still providing enough protection from radiation while the poles continue to shift.

Although we do not honestly know when the shift will occur, we see that things are on the move. With some forethought and planning, we hope the impact on our power grids and satellites will have minimal damage. Only time will tell what lies ahead when the poles completely shift.