Today, rockets are powered with more than just kerosene and hydrogen for fuel. Read on to learn more about how spacecraft use ion thrusters to power them through space.

Since the invention of rockets, people have used fuel, such as kerosene, to send planes and rockets soaring high above the clouds. Now, with the advance in technology, scientists have learned how to power spacecraft with atoms.

It takes a lot of fuel to power a rocket into space. After the launch, the first part of a rockets burns for about three minutes. Then the second phase of the rocket burns. The total burn time is less than ten minutes. Two things happen once the rocket is out of fuel. First, the spacecraft can power itself toward during a change in course. Secondly, the spacecraft can only travel for a few days.

Hall thrusters were worked on by both the Russians and Americans the 1960s. The first hall thruster to operate in space, an SPT-50 aboard a Soviet Meteor spacecraft, was launched December 1971. They were mainly used for satellite stabilization in North-South and East-West directions. In 1992, American scientists visited the Russians and learned about large scale Hall thrusters. The European Space Agency used hall thrusters for the lunar orbit of Smart-1 in 2003.

In space, a chemical rocket can through gases out the back at 5 km/second. However, ion engines can eject atoms at 90 km/second. This high velocity gives the spacecraft a much more efficient acceleration. Chemical rockets see a fuel efficiency of 35%. Ion rockets see an efficiency of around 90%. Instead of ejecting hot gases, ion thrusters eject ions which are atoms that have lost an electrical charge. How did they lose an electrical charge? They have lost or gained an electron. In the case of an ion engine, they are emitting positively charged ions which have lost an electron. Furthermore, ions can be directed with an electromagnetic field. This magnetic field can accelerate them into space at incredibly fast speeds.

An ion thruster uses propellant. A propellant is a gas like Xenon. Scientists use Xenon because it makes the desirable level of thrust when the ions are accelerated. Furthermore, it has a high storage density. Therefore, it makes it easy to store on spacecraft.

Most thrusters ionize propellant by electron bombardment: a high-energy electron (negative charge) collides with a propellant atom (neutral charge). Consequently, the atoms releases electrons from the propellant atom and results in a positively charged ion. The gas produced consists of positive ions and negative electrons.

The positively charged ions are accelerated out of the thruster as an ion beam, which produces thrust. The neutralizer expels an equal amount of electrons to make the total charge of the exhaust beam neutral. Without a neutralizer, the spacecraft would build up a negative charge. Eventually, ions would be drawn back to the spacecraft, reducing thrust and causing spacecraft erosion. (NASA 2019) 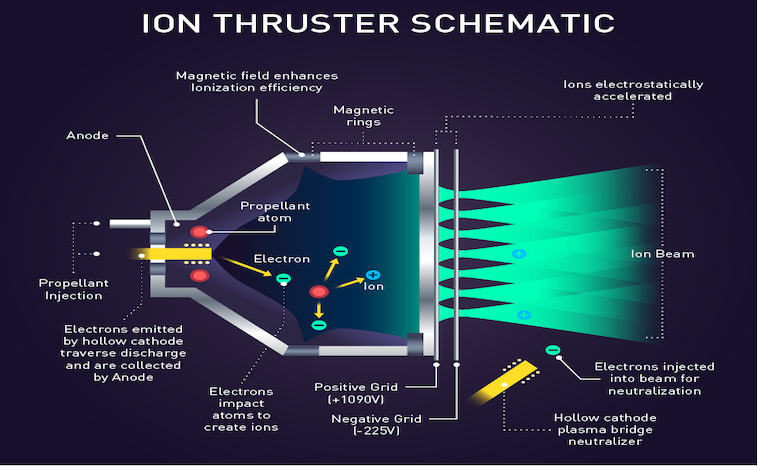 The spacecraft carries solar panels which reduces the need for a battery. The benefit to this type of thruster is that they can operate for days, weeks, and months. In 1998, NASA used this type of thruster for a deep space launch. The ions thruster allowed them to make close observations of asteroids, comets, and Mars. On Earth, ion thrusters have been used and were able to operate continuously for five years.

As technology increases the use of ion thrusters will become the power source used with spacecraft. One day, we may see them become the energy source used in machines around the world.