Gods of the Sun and Moon

Have you ever read stories about the ancient Gods and Goddesses from different groups of people? They often created these Gods to explain the reason the sun rose or the moon eclipsed. Read on to learn more the Sun and Moon Gods.

For thousands of years men have looked upon the stars and created Gods and Goddesses to explain why the Sun rose and the moon disappeared. Religions from ancient times convinced worshippers that the Sun God controlled the weather that affected their crops. They believed the God of the Moon held special powers, and together these two entities needed sacrifices to produce good crops or blessings upon the family. Sacrifices included everything from animals, to crops, to human blood. Priests convinced the people that their only hope of success and peace rested upon pleasing the sun and the moon.

ANCIENT EGYPT– Ra the Sun God, considered to be the King of the Gods, the creator, and thus the patron of the pharaoh and one of the central gods of the Egyptian pantheon. It is sometimes proposed that the pyramids represent the rays of light extending from the sun and thus these great monuments connected the king with Ra. The Egyptians also built solar temples in honor of Ra. Unlike the standard type of Egyptian temple, these temples, opened to the sunlight and did not feature a statue of the god. He represented the sunlight itself.

ANCIENT INCAS- Inti, the Sun god, and his wife Pachamama, the Earth goddess, were regarded as benevolent deities. The Incan people believed they derived from them. Apparently Inti had a temper, and if angered would impose solar eclipses upon the Earth. Sacrifices appeased him and won back his good favor to the Incan people.

AUSTRALIAN ABORIGINES– To the Aborigines, the Sun, a woman who awoke daily in her camp in the east, lit a fire, and prepared the bark torch she carries across the sky. Before setting out, she decorated herself with red ocher, which she spills, coloring the clouds red. Upon reaching the west, she reapplied her paint, again spilling reds and yellows in the sky. The Sun-woman then began a long passage underground back to her camp in the east. During this subterranean journey her torch warmed the earth, causing plants to grow.

NORSE – Sol, sister to Mani, the moon, formed a pair. They did not know what their role in the new world. Then the gods met together and created the different parts of the day and year and the phases of the moon. Sol and Mani would know where they fit into the great scheme of things. They rode through the sky on horse drawn chariots chased by wolves. Sol’s horses are named “Early Riser” and “Swift”. Occasionally SKOLL, one of the wolves, gets close enough to risk a bite and the sun would eclipse.

ANCIENT EGYPT – Hathor – Tefnut, the goddess of “moisture”.  The first name refers to the full Moon, while the second one to the New Moon. The ancient Egyptians depicted her as a woman with a lion’s head. 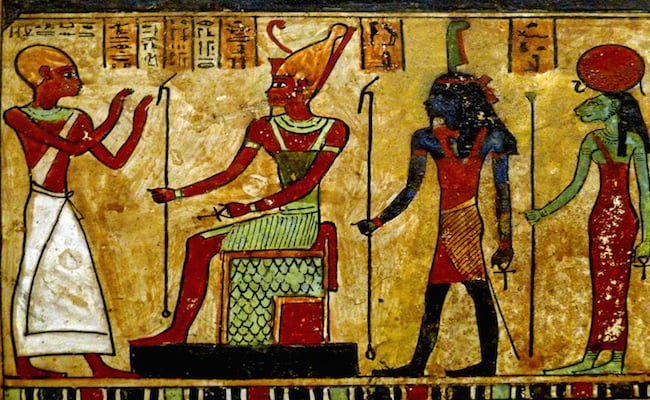 ANCIENT INCAS– Mama Kilya, the moon Goddess, regulated the festival calendar and all matters of time. She was also a prophetic Goddess, often warning of impending danger through eclipses. Many believed a lunar eclipse was caused by an animal attack, so one should make as much noise a possible to frighten away evil influences. Dedicated priestesses served her temple, located in Cuzco.

NORSE- Mani is the personification of the moon in Norse Mythology. See Sol above for an explanation of their relationship.

AUSTRALIAN ABORIGINES– The Yolngu tell that Ngalindi, the Moon-man, once young and slim (the waxing Moon), grew fat and lazy (the full Moon). His wives chopped bits off him with their axes (the waning Moon); to escape them he climbed a tall tree towards the Sun, but died from the wounds (the new Moon). After remaining dead for three days, he rose again to repeat the cycle, and continues doing so till this day. The Kuwema people in the Northern Territory say that he grows fat at each full Moon by devouring the spirits of those who disobey the tribal laws.

“In modern times we can explain the cycles of the sun and phases of the moon. With our technology stories do not need to be created. We should remember and read the stories of ancient peoples. Their stories not only entertain our minds with creativity, but connect us to a time that people did their best to explain the mysteries of our universe.”