Who was one of the first astronomers looking for extraterrestrials? Read on to find out about one astronomer that changed our search for alien life.

Frank Drake was an American astronomer born in Chicago, Illinois, in 1930. During his youth, he spent time learning about science. His favorite exhibit was at the Chicago’s Museum of Science and Industry. It was there that he learned about our Sun and its existence, among others in the Milky Way galaxy. Furthermore, he started to believe that other civilizations may also exist in space. It was not until his young adult years that Frank Drake searched for extraterrestrials.

At age 17, Frank won a Navy scholarship that enabled him to go to Cornell University, in Ithaca, New York. He intended to become an airplane designer but became more interested in electronics. He eventually majored in engineering physics. However, it was the planet Jupiter that changed his career choice. At the university, he took an astronomy class. During one class session, he looked through a 15” telescope and saw Jupiter. He became enthralled with the red spot and overall appearance of the planet. This excited his interest in astronomy even more.

Once he graduated from Cornell, he spent a couple of years in the Navy. After his service, he went to Harvard University to study astronomy. With a background in electronics, he was placed to work in radio astronomy at the National Radio Astronomy Observatory.

Radio astronomers analyze signals reaching Earth in the radio part of the electromagnetic spectrum. In addition, they can also use radar-style techniques to study planets. This is done by sending out a radio signal to rebound from a planet. The signal then sends back information about the surface.  Frank believed that radio signals would be the way of discovering alien civilizations. 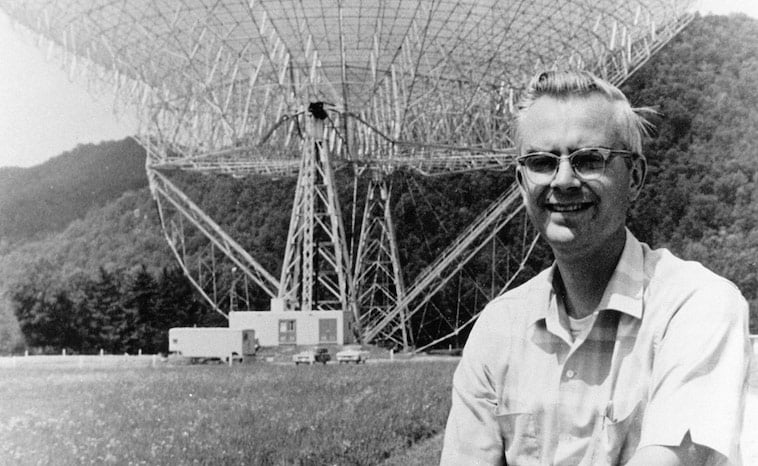 Drake set up the first millimeter-wave telescopes at the National Radio Astronomy Observatory and pioneered the use of radio telescopes in the Search for Extraterrestrial Intelligence (SETI).

While working as a radio astronomer at the National Radio Astronomy Observatory in Green Bank, West Virginia, Dr. Frank Drake had an idea. He bound the terms mathematically involved in estimating the number of technological civilizations that may exist in our galaxy. The Drake Equation was first presented by Mr. Drake in 1961 and identified specific factors thought to play a role in the development of such civilizations. Although there is no unique solution to this equation, it is a generally accepted tool used by the scientific community to examine these factors. (SETI 2020)

N is the number of detectable civilizations in space

R* is the rate at which new stars form

fp is the fraction of stars with planets

fl is the number of planets where life actually emerges

L is the length of time the communicating civilization remains detectable

In addition, Mr. Drake also mapped the center of the Milky Way galaxy. Although aliens have not made contact with mankind, as far as we know, Mr. Drake has given us much to ponder. In the meantime, the search continues for communication with extraterrestrials.