What keeps the stars in galaxies like Andromeda swirling together? Why do the outermost stars travel as fast as the innermost stars? Read on to learn about Dark Matter and its impact on objects in space.

We know that matter exists from the formation of atoms and molecules comprised of protons, neutrons, and electrons. But in space, a type of matter exists that we cannot see with the naked eye. Referred to as dark matter, scientists believe it comprises 85% of the matter in the universe. Gravity of visible matter is not strong enough to form galaxies and complex structures. Something must hold these objects in place, otherwise, they would scatter across the universe.

In our universe, planets orbiting closer to the sun rotate faster around the sun than those planets further away. Due to the sun’s gravitational pull not reaching as far, the planets such as Saturn and Neptune, orbit much slower.

Newton’s Second Law of Motion states Force=Mass x Acceleration. It is expected that the velocity of stars would decrease as we shift from stars located near the center of the mass in a galaxy to stars located farther away on the outer edge. 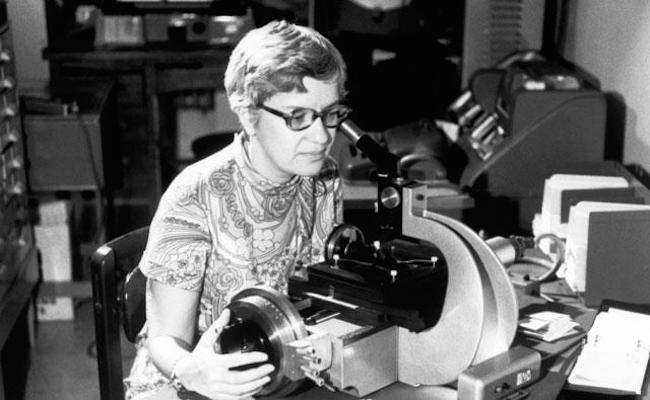 In 1977 Vera Rubin, an astronomer, analyzed the spiral galaxy of Andromeda. Theories prevailed that the stars further out away from the center of Andromeda would move slower than the stars at the center. She discovered instead, that the stars were moving as fast, even though the gravitational pull did not reach as far. What caused them to stay at this constant speed? Rubin discovered Dark Matter and its impact on all galaxies.

“Rubin found that there must be five or six times as much of this invisible material than the visible matter in galaxies.”

Dark matter is the speculative substance that astronomers believe make up most of the mass of the universe, and is what holds galaxies and clusters together. Conventional theories say that this matter is made up of unidentified particles. These particles, referred to as Axions, have mass, and do not emit light or absorb electromagnetic radiation (light). A huge cloud of them together would remain dark. It does not act like normal matter and would pass right through you without your knowledge.

How We Know Dark Matter Exists?

Places with a high concentration of dark matter bends the light passing nearby. Imagine space as a piece of fabric with objects ingrained in the fabric. The more mass an object has, the more gravity it possesses to warp space and the path of a light beam. Dark matter interacts with objects through gravity. The amount of gravity a galaxy sends out depends on the mass of the cluster stars. Scientists measure that gravity by measuring the objects behind it. The gravitational push made by the dark matter on the cluster of stars keeps them from scattering across space. The dark matter affects how galaxies rotate, how they move in clusters, and how large structures form.

Scientists Know that Dark Matter is Not:

Dark Matter, whatever comprises it, interacts with gravity and scientists believe that it does exist. If scientists can develop the technology to view axion particles, the advancement of space knowledge would increase tremendously. Thanks to Vera Rubin, we now know that something keeps objects in space moving together through gravitational pull. Hopefully scientists will develop technology that will be able to show us what it Dark Matter truly looks like.