Beta Pegasi is the second brightest star in its home constellation shining 1,500 times that of the Sun. Its traditional name of Scheat comes from Arabic meaning ‘the upper arm’. Arabian astronomers have also named this star Mankib al Faras meaning ‘the horse’s shoulder’. This star loses mass each year expanding it to 3,500 time the radius of the Sun.

Beta Pegasi is located approximately 196 light-years away in the constellation of Pegasus. This constellation is the 7th in size out of the 88 and is home to one meteor shower and one Messier. Scheat is also one of the stars that makes up the Great Square of Pegasus.

This star can be seen in its home constellation located in the fourth quadrant of the Northern hemisphere, specifically between latitudes of +90 and -60 degrees. Because this star is bright enough it can be viewed with the naked eye – just look to the upper-right corner in the Great Square of Pegasus to see this shining beauty. 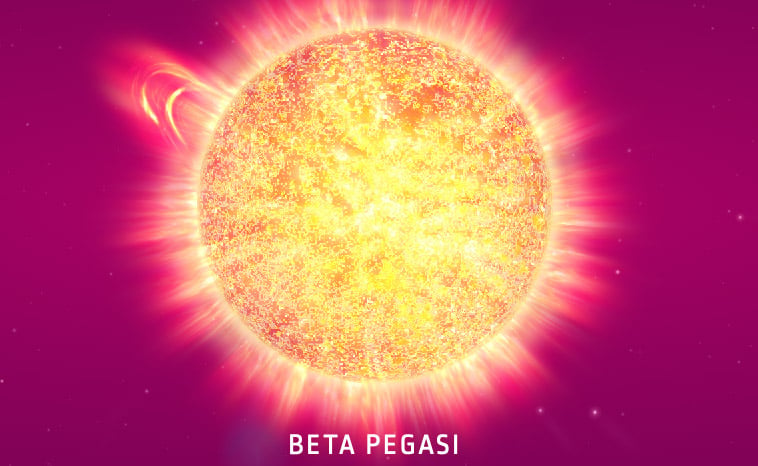 Scheat is a red star that is between the sub-giant and giant stage of evolution, which places it with a stellar classification of M2.3 II-III. Because this star is losing mass each year, it is expelling gas and dust so it has already expanded to 3,500 time the radius of the Sun.

Beta Pegasi is the 2nd brightest star in the constellation of Pegasus. It is also a semi-regular variable star so it changes in its luminosity range from 2.31 magnitudes to 2.74 magnitudes. It shines approximately 1,500 times that of the Sun and has an outer envelope temperature of 3,700 Kelvins or 6,200 degrees Fahrenheit (3,426 degrees Celsius). This is what gives Scheat its orange-red color.

Although, there is no mythology specifically surrounding Beta Pegasi the constellation itself is steep in tradition and mythology. The winged-horse (Pegasus) was thought to have sprung out of Medusa’s severed head. After he was born he flew to Mount Helicon where he lived and was friends with the muses. Pegasus went on to create a fountain by striking his hoof on the ground. It was called, Hippocrene which means “the horse’s fountain.” It was said that all who drank from these magical waters would be blessed with the gift of poetry.

Beta Pegasi is not just another twinkling celestial object, it has some cold hard facts and true significance. So if you have a chance to view this fascinating star of the Great Square of Pegasus be sure to check it out.

Fly to Beta Pegasi in 3D!