Beta Leporis is 240 million years-old and is sometimes referred to as Nihal which is Arabic for ‘quenching their thirst’. However, Al Nihal was once used in ancient Arabic to mean ‘the drinking camels’. This yellow bright giant also measures about 16 times the radius of the Sun and has 3.5 solar masses.

Beta Leporis is located approximately 160 light-years away in the constellation of Lepus. It is the 51st constellation in size out of the 88 and is home to one Messier (NGC 1904). Lepus also belongs to the Orion family of constellations.

This star can be seen in its home constellation located in the second quadrant of the Northern hemisphere, specifically between latitudes of +63 and -90 degrees. Because this star is bright enough it can be viewed by the naked eye. 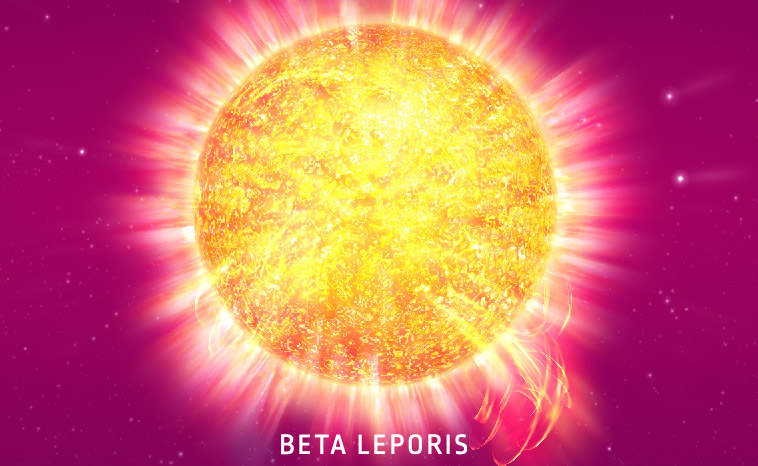 Nihal is a yellow bright giant star that measures about 16 times the radius of the Sun and has 3.5 solar masses. This star is in the process of rapid rotation and will begin to fuse its internal helium to carbon to move into the G-type bright giant stage of its cycle; however, this will not occur for a few million years. Beta Leporis is also a double star system and possibly even a binary. Its companion star is located about 2.58 arcseconds away and is thought to be a suspected variable star (NSV 2008).

Beta Leporis is the second brightest star in Lepus with an apparent magnitude of 2.84. It shines approximately 165 times that of the Sun and has an effective temperature of 5,225 Kelvins or degrees 8,945 Fahrenheit (4,951 degrees Celsius).

The name Nihal alone is translated from Arabic to mean “quenching their thirst. However, Al Nihal was once used in ancient Arabic to mean, “the drinking camels” and represented the four brightest stars of the Lepus constellation – the pattern of these stars were interpreted as a group of camels drinking from the “river” of the Milky Way. Although, there is no mythology specifically for Nihal, its home constellation is thought to represent a rabbit being hunted by Orion’s dogs.

Beta Leporis is not just another twinkling celestial object, it has some cold hard facts and true significance. So if you have a chance to view this fascinating star of the Lepus constellation, be sure to check it out.

Fly to Beta Leporis in 3D!