Astronomers have announced that they have discovered a new planet orbiting Barnard’s Star. Read on to learn more about this exciting discovery.

Back in 2016, astronomers announced that they had found a planet orbiting Proxima Centauri. Proxima Centauri is the closest star to our sun at four light years away. That planet, known as Proxima b, became the ideal candidate for researchers to study because it may have water as well as other habitable conditions. It’s star, Proxima Centauri does not burn as bright as our sun and is 1/8th the mass of our sun. Using similar techniques that helped them discover Promixa b astronomers found Barnard’s Star B.

How did they find a planet near a sun six light years away? Researchers used the “transit” technique to identify this potential planet candidate. This technique measures the dip in starlight as a planet passes before it. However, that method can only detect a planet if they spend years looking at one star. This tedious and time-consuming practice can only find a small percentage of the planets passing in front of their stars. As a result, astronomers employ other methods to pinpoint a planet transversing a star.

By measuring their gravitational tug on a star, hundreds of exoplanets impact periodic Doppler shifts in the frequency of starlight. The researchers used the radial velocity method during the observations that led to the discovery of Barnard’s star b. This technique detects wobbles in a star. This wobble comes from the gravitational pull of an orbiting planet. As a consequence, these wobbles affect the light coming from the star. When the star moves towards the Earth, its spectrum appears slightly shifted towards the blue. After the star moves away, it the shifts towards the red.

In 2015, astronomers saw these small shifts in the light from Barnard’s star. This was the first time researchers used this method to detect an exoplanet so far from its star. “Then we went hard for it,” says astronomer Ignasi Ribas of the Institute of Space Sciences in Barcelona, Spain, who led the new project. (Nature, 2018) 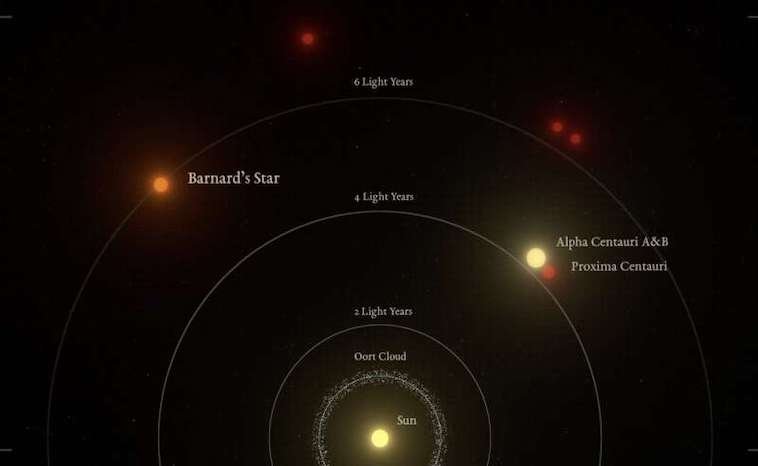 Research For Years To Come

Due to the glare coming from Barnard’s Star astronomers will have a difficult time learning more about this new planet. They say it will require the use of special telescopes fitted with coronagraphs. A coronagraph tool attaches to the telescope. It blocks out the direct light from a star so scientists can see nearby objects. Without the coronagraph, the bright glare from the star would make it impossible for them to see anything.

Astronomers have more research to do. Dr. Ignasi Ribas, from Institut d’Estudis Espacials de Catalunya and the Institute of Space Sciences in Spain, said: “After a very careful analysis, we are over 99 percent confident that the planet is there since this is the model that best fits our observations. However, we must remain cautious and collect more data to nail the case in the future.” (Nature, 2018)

What will researchers discover about this new planet? You can follow their research at Red Dots.com.