Archeoastronomy is the science that studies the ways in which ancient people viewed the sky, as well as the ways in which they understood what they saw there, or how they incorporated that knowledge into their understanding of the world and their religion.

As you can see, the first emphasis is on observing the sky. Observation is the beginning of all knowledge. That was true in the distant past and it is still true today.

For those who want to deal with this science, for starters, a few basic instruments and an interest in the subject will be enough. You can exercise from your yard or on your terrace. A flat place with a wide view is best, but if there is no such place nearby, any place can serve if at least one celestial body can be seen from it, the sun during the day, the moon, stars, or planets at night.

The first thing you need to know is that the ancient civilizations thought that the Earth was a flat plate or a disk, surrounded by the ocean. At the end of the Neolithic era, they were already able to determine the sides of the world, observing the Sun and its (apparent) movement in the sky. That was quite enough to orient themselves in space and time.

How did the ancient nations determine the sides of the world?

Well, they determined them with a stick and a rope.

And no, we’re not kidding at all. The rod and the rope are basic astronomical tools.

If you stick an ordinary flat stick into the ground, its shadow will show the geographical north at noon and it will also be the shortest shadow during that day, provided that the surface is flat (horizontal), and the stick is vertical.

But that noon is not the same noon, when the clock shows 12pm. Strictly speaking, the real astronomical noon is when the Sun crosses the central meridian above your standing point.

Then wait for the afternoon shadow of the stick to be the same length, then draw it on the ground as well.

Those two shadows, morning, and afternoon (which are the same length) will be at a certain angle. The bisector of that angle will accurately show the geographical north and south. At that moment, you also learned the exact direction of the local meridian, and tomorrow you can determine when the astronomical noon is at your place of observation.

The stick, driven into the ground, was called Gnomon by the ancient Greeks. That name would mean “The one who knows.” And that’s right, the gnomon is a precious thing: it shows the direction of the sun’s rays at all times.

The gnomon, its shadow and the sun’s rays form one right triangle, which will give you information about the angular height (altitude) of the sun. 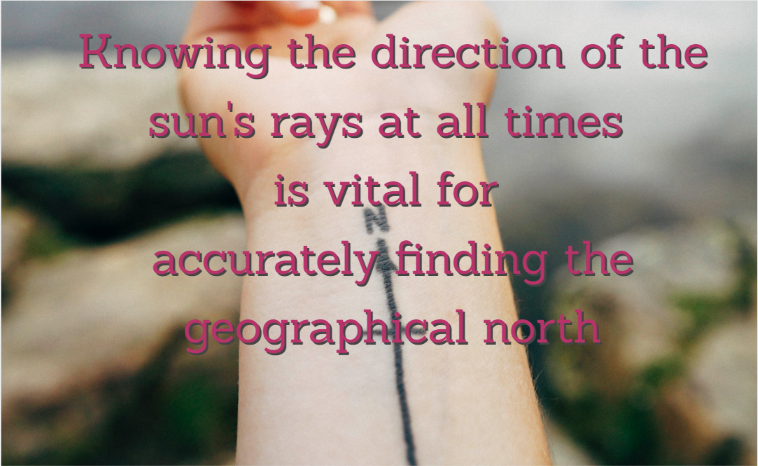 When you specify North, the shadow of the gnomon will be at a certain angle to the north, so you will also have a horizontal angle, called Azimuth, measured from north in a clockwise direction.

These two dimensions are basic in the horizontal coordinate system for observing the sky. All you need to use the gnomon is a clear day, a stick, and a rope. Once you master the basics of this primitive tool, you can never get lost. You will always be able to orient yourself towards the Sun.

The ancient Egyptians were very skilled in handling these basic tools. More precisely, this duty belonged to high priests, because astronomical knowledge was considered a gift of the Gods. Those priests were called “Those who stretch the rope”. The precision of the orientation of their monumental buildings still amazes scientists today.

Stay tuned for the next part where we will talk more about the compass and inclinometer.