Many people are fanatical about following their zodiac sign. If you’re one of them then you know if you were born between June 21st and July 22nd your zodiac sign is Cancer (the Crab). Being born under this sign may give you some distinguishing personality traits, but most of all you can look to the sky to see this intriguing configuration of stars. Let’s explore “the Crab” to discover what it is really all about.

The constellation of Cancer is the faintest one among the thirteen and can be found in the Northern hemisphere between Regulus (Leo constellation) and the two brightest stars of Gemini (Castor and Pollux). However, even though part of June and July is this constellations zodiac “birth dates” it cannot be viewed in the summer months due to the Sun’s glare.

To take a peek at Cancer you will need to do some early evening viewing in the late winter to early spring months (March, April and May) then again in the predawn hours of September. In addition, because this constellation is very dim, it is recommended you view it in a dark country spot with little to no light-pollution. 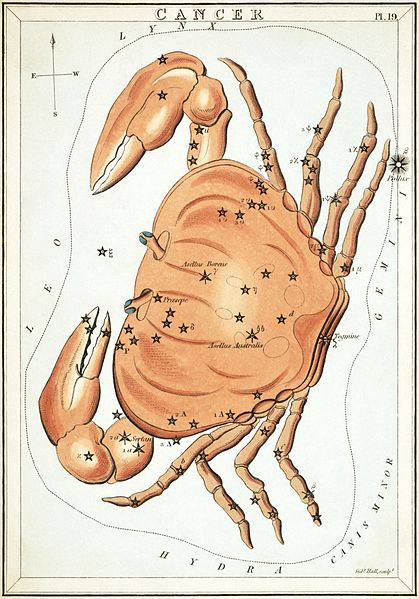 So Much More Than Just a Horoscope

Even though the Crab may be difficult to pinpoint, its best feature is a wonder to behold; the Beehive Cluster or M44. This open cluster contains approximately 1,000 stars all swarmed together into a 1.5 degree area (about three full moon-diameters) and can be easily viewed in a dark area with binoculars.

To locate the Beehive look once again to our “pointer stars” Regulus and the Castor/Pollux pair as M44 is nestled in the space halfway between the trio. Interestingly enough, Galileo was the first to spy “the Hive” in 1609 using only two pieces of glass and a paper tube, although he could only detect about 40 stars in this fabulous formation.

All of the stars in the Beehive are gravitationally bound to one another which indicates this cluster was most likely created from the same star-forming nebulae. It is between 520 and 610 light-years away from Earth and has a larger population of stars than most of our nearby clusters.

Both science and astrology believe “the Crab” has some significant history and modern-day meanings. Astronomers have been led to believe the sun may have originated from Messier 67, a fainter star cluster in the constellation of Cancer. However, in astrology Cancer is called “the house of the Moon” because it is here that some believe the moon was created.

Approximately 2,700 years-ago in the Northern hemisphere’s summer solstice the sun passed in front of the Beehive Cluster. Today, the sun is in conjunction with this open cluster in late July or early August.

Cancer has even made an appearance in the philosophy of both the ancient Chaldean and Platonic periods. Here it was referred to as “the Gate of Men” and was thought to be the portal from which souls descended from the heavens into newborn babies.

The Beehive cluster also served as a celestial weather report. In fact, ancient cultures called this swarm of stars “Praesepe” meaning, little cloud. It was written by Roman author, Pliny that if Praesepe cannot be seen in a clear sky, it’s a sign of a storm on its way – not exactly the easiest way to predict the weather…

What’s up with Cancer today?

This constellation symbolizes the glory of the Summer Sun. It will pass in front of the Crab from July 21st until around August 10th. Plus, we still say the sun shines over the Tropic of Cancer on the June solstice, not the Tropic of Taurus (where it actually is).

For all you folks out there that have birthdays falling within the Crab’s dates here are a few qualities you may (or may not) recognize in yourself.

Cancer Zodiacs are loyal, dependable, caring and adaptable, but you may find yourself with the weaknesses of being moody, self-absorbed, clingy and overly sensitive. You cherish your good friends and will protect them no matter what may come. Cancers make good listeners; however, it may be difficult to get this sign to reveal their own true, deep feelings.

If you are a Cancer you may feel the need to be needed and have a delicate temperament that can be easily changed to irritability and even possible temper tantrums. But once you get over your insecurity your powerful character shines through. Cancers make excellent business people and investors due to their strong desire for wealth and their ability to achieve their goals.

The constellation of Cancer is so much more than a configuration of stars. If you are in a dark area in the Northern hemisphere take some time to get to know the fourth zodiac sign in our night sky. You will be so glad you did.