Man has consciously lit the first fire long ago, in ancient times. From then until today, we’ve learned that fire is a good servant and a bad master. However, it has always been a fire on earth. With the first flights into space, the question arose as to how fire burns under conditions of zero gravity.

This was of particular interest to American researchers because they planned for manned missions to be filled with pure oxygen inside the spacecraft.

And oxygen aids combustion. In 1967, a spark turned the cabin of the Apollo 1 into a torch and three astronauts were killed.

The cabin was filled with pure oxygen. However, Apollo burned down while it was still on the launch pad.

And what about fire up there?

Well, in a weightless state, fire tends to go out on its own. Why?

Earth is the only known planet where fire can burn. There is simply not enough oxygen on other planets. The more oxygen, the warmer the fire.

Here on earth, when you light a fire, it produces light, heat, carbon dioxide and water vapor.

The heat causes the products of combustion to expand which reduces their density and they rise in height (you probably know that the air above the flame is warmer than below the flame). The surrounding fresh air with oxygen thus reaches the flame and encourages further combustion.

The flame of a candle is blue at the bottom because the fire takes oxygen there, and yellow at the top, where it burns it.

However, in a weightless state, the products of combustion do not go anywhere. They accumulate around the flame and thus prevent oxygen from reaching it and help it burn.

Gravity is, therefore, necessary for good fire. In order for the fire to burn in a room of a spaceship where zero gravity reigns, it is necessary to somehow provide an influx of oxygen, so that, for example. a fan could constantly disperse the accumulated carbon dioxide. After all, we know for ourselves that fire burns harder when we blow into it.

But that is so in theory. How is it in practice, in the conditions of microgravity that prevails on the International Space Station?

The first experiment was performed in 1997 on the shuttle Columbia in a sealed chamber – and the flame lasted a long time. True, it was quite different than on earth.

The first thing the scientists noticed was the shape of the flame. 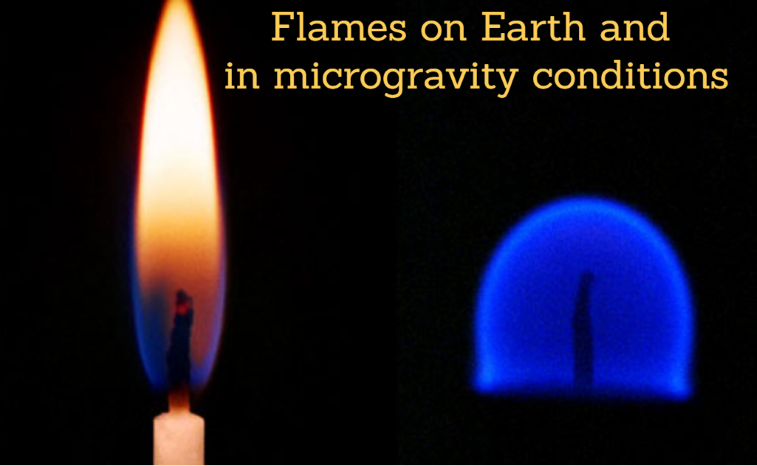 While on Earth the flame of fire is elongated upwards in microgravity it is spherical and resembles a fireball. On Earth, warm air is lighter (than cold) and rises upwards, and in the conditions of microgravity there is no such thing, just as there is no “upwards”, ie. there are no such things in the universe as “up” and “down”.

According to this, the fire in space has a spherical flame, and since there is not enough oxygen, that flame is actually smoldering. And it got a bluish color of low gloss.

In other words, there is no chance to fire up a good grill up there in space.