Alnitak is 33 times larger than the Sun, 20 times its diameter and shines 10,000 times its luminosity. This star is estimated to be around six million years-old. Alnitak also has stellar winds that can reach speeds of 2,000 kilometers/second (1,240 miles/second)! In 1819 an amateur astronomer, George K. Kunowsky, discover Alnitak to be a double star.

Alnitak is found in the constellation of Orion and is approximately 700 light-years in distance. It is the easternmost star located in Orion’s Belt. It is lies beside a bright emission nebula named, IC 434 and to the south is the Horsehead Nebula.

To view this bright star, first locate Orion’s belt. There you will see three predominant stars, Alnitak is the first or left hand star among the trio. If you are more scientifically inclined it may be helpful to know this star is several hundred parsecs away. Alnitak is favored among amatuer sky-watchers as it is visible to the naked eye. 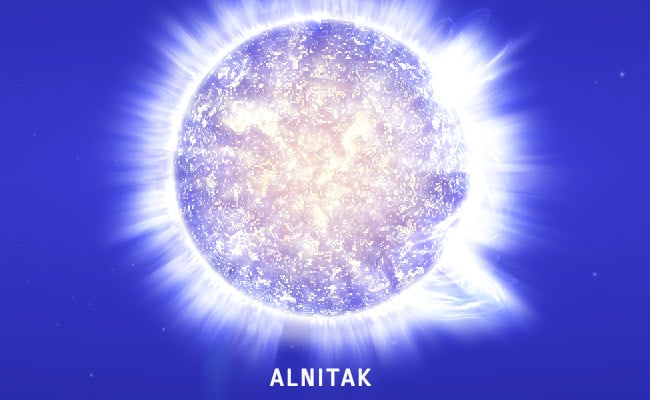 Alnitak is a multi-star system with its main component, Alnitak A, being a hot blue supergiant. It also has a close binary star composed of two blueish 4th magnitude stars. One is a 09.7 class supergiant with a 28 times solar mass and the other is a blue dwarf rated as a spectral OV class; this dwarf was only discovered in 1998 and completes a rotation around the first in just over 1,500 years. In addition, Alnitak has stellar winds that can reach speeds of 2,000 kilometers/second (1,240 miles/second) which causes the star to emit x-rays. Alniak is estimated to be about six million years-of-age and burns at about 60,000 degrees Fahrenheit (33,315 degrees Celsius).

Alnitak is the brightest class O star in the night sky, shining with an apparent visual magnitude of 1.74. It is 33 times bigger than the Sun, 20 times its diameter and shines 10,000 times its luminosity.

Historically, in 1819 an amateur (German) astronomer by the name of, George K. Kunowsky discover Alnitak to be a double star. The suspects made in 1970 with the Narrabri Stellar Intensity Interferometer that Alnitak had a close companion star were confirmed in 1998 by the Lowell Observatory. In mythology Orion’s Belt is considered to be many different things by different cultures. Check it out;

Alnitak is not just another twinkling celestial object, it has some cold hard facts and true significance. So if you have a chance to view the first star of Orion’s Belt be sure to take a peek at one of the most intriguing views you may ever experience.

Fly to Alnitak in 3D!