A stick, a rope, and the sky: What is a gnomon?

In recent archeology-astronomical research, Plato’s gnomon factor is often mentioned. This is certainly a term that needs to be clarified and then the possibilities of its use should be considered.

The gnomon can be briefly described as a stick, driven into the ground, which serves to monitor the apparent movement of the Sun. It was named by the ancient Greeks, its meaning is “the one who knows”. The ratio of the height of the gnomon and its shadow will give the angular height of the Sun at some point, and if we know in which direction the geographic north is, the direction of its shadow can be measured with a protractor.

Plato is credited with determining that at noon on the solstice, the ratio of the height of the gnomon and the length of its shadow is not the same in all parts of Greece. Today it is known that this is due to different latitudes.

Plato could not have known that, because in his time it was considered that the Earth is a flat plane, surrounded by the Ocean, and around all that is a celestial sphere. Therefore, the concept of geographical coordinates (latitude and longitude) could not exist.

Plato didn’t even have a watch, in today’s sense of the word. He only had an hourglass at his disposal which measures the elapsed time, but he couldn’t say when it was noon. But Plato found a way when he noticed that the shadow of the gnomon (in the northern hemisphere) is pointing exactly to the north. Keep in mind that people were able to determine the north and south even in the Neolithic era.

The Greeks called the north Borei, after their deity of the north wind. Other parts of the world were named after the main wind deities (Boreas, Notus, Eurus and Zephyr). The ratio of the height of the gnomon to its shadow depends on the latitude of the place of observation.

The first use of the gnomon

As far as is known from previous research, the first use of gnomons is associated with ancient Egypt. The Egyptians used the “stick and rope” very skillfully since they were forced to restore the boundaries of their estates every year, after the floods brought by the Nile. That job belonged to the clergy.

Those who performed it were called “those who stretch the rope.” Their rope had knots at the right distances, whose name the Greeks later translated as Harpedon, and the name of the people who handle it as Harpedonaptai.

How did they determine the north and the south?

If they knew where the north was, they knew automatically where the south was. They also knew that the point of sunrise moved correctly on the horizon during the year, reaching its southernmost position on the short day, and the northernmost on the long day, and probably they had some good natural landmark on the horizon for one of those days.

But, if they noticed that the shadow of the stick (gnomon), on a certain day (equinox) at noon is equal to its length, they only had to wait for the sunset on that day, so that they know where the west is, and thus the east. 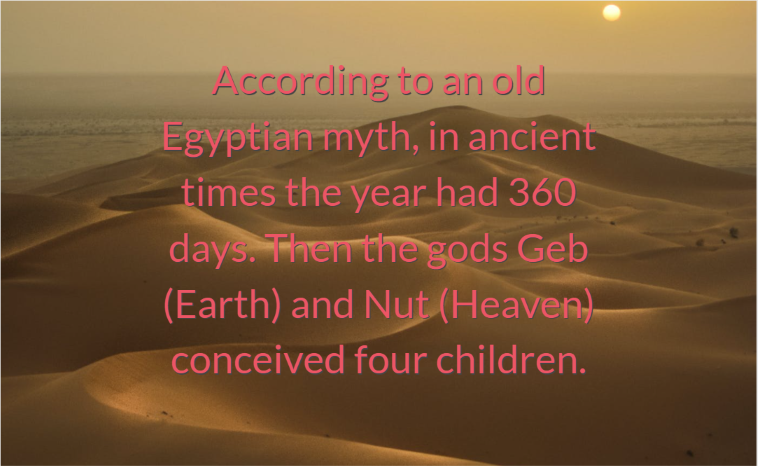 The ancient Egyptians were able to determine the north, which in their time was located near the star that is today called Tuban and is located in today’s constellation of the Dragon. Egyptian astronomical knowledge is presented in a series of texts, popularly called the Book of the Goddess Nut. Scientists find these texts written on the walls of tombs and temples, on preserved papyri.

According to an old Egyptian myth, in ancient times the year had 360 days. Then the gods Geb (Earth) and Nut (Heaven) conceived four children. Before this happened, Jealous Ra actually cursed Nut so that she could not give birth on any day of the year. God Toth realized it was an injustice.

He played a senate game with the moon goddess Khons and in the game he got a 1/72 of every day of the year, which makes a total of five days. Those five days he then added to the year.

In those five days, Nut gave birth to Osiris, Isis, Seth, and Nephthys. It is the oldest known calendar myth, which makes it clear that its creators knew the length of the solar year.