The Giant Magellan telescope, once complete, will be the largest optical observatory in the world. Read on to learn more about this powerful telescope.

In 2015, scientists and engineers began work at the Las Campanas Observatory in Chile in preparation for the new Giant Magellan Telescope (GMT). The earth-based telescope will house seven mirrors for observation. Recently, engineers working at the University of Arizona have finished building the sixth mirror. Mirror construction began in 2005. They plan to have the seventh mirror complete by 2023. Once complete, the telescope should see its first light by 2029.

Engineers and scientists chose Chile for two reasons. First, the area has a limited impact from light pollution. Light pollution occurs from buildings and homes. Large cities prevent many space observers from seeing the multitude of stars in the night sky. Second, the Las Campanas Observatory, located more than 2,500 meters (8,200 feet) above sea level, provides a dry location with limited winds. As a result, the GMT will have spectacular viewing conditions for more than 300 nights a year. 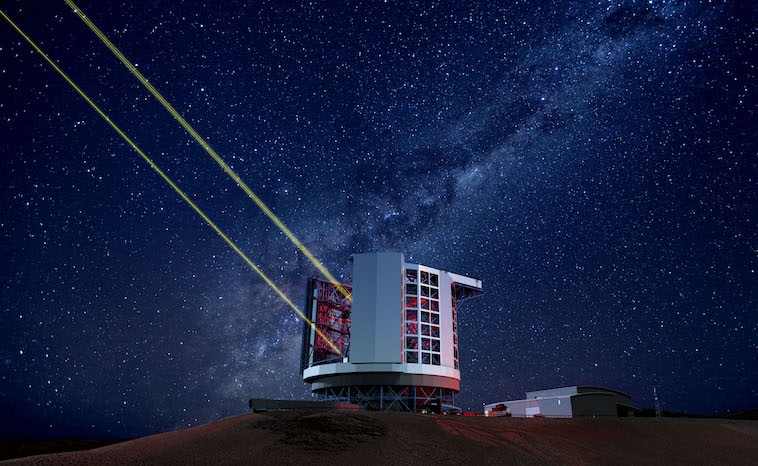 Mirrors for the Telescope

“The most important part of a telescope is its light-collecting mirror,” said James Fanson, Project Manager of the Giant Magellan Telescope. “The larger the mirror, the deeper we can see into the universe and the more detail we can observe. The discoveries these mirrors will make will transform our understanding of the universe.”

The Giant Magellan Telescope is a segmented mirror telescope that employs seven of today’s largest stiff monolith mirrors as segments. Six off-axis 8.4 meter or 27-foot segments surround a central on-axis segment. This forms a single optical surface 24.5 meters, or 80 feet, in diameter with a total collecting area of 368 square meters. The GMT will have a resolving power 10 times greater than the Hubble Space Telescope. Once operational, the Giant Magellan Telescope will produce images ten times sharper than Hubble. As an example, it will have enough power to see the torch engraved on a dime from nearly 160 kilometers (100 miles) away.

How Mirrors Are Cast

The casting of the giant mirror at Arizona’s Richard F. Caris Mirror Lab involves melting nearly 20 tons (38,490 pounds) of high-purity, low-expansion, borosilicate glass (called E6 glass). This process is done inside the world’s only spinning furnace designed to cast giant mirrors for telescopes. At the peak of the melting process, the furnace spins at five revolutions per minute. It heats the glass to 1,165 degrees Celsius (2,129 F) for approximately five hours until it liquefies into the mold.

The peak temperature event is called “high fire.” The mirror then enters a one-month annealing process where the glass is cooled while the furnace spins slower to remove internal stresses and toughen the glass. It takes another 1.5 months to cool to room temperature. This “spin cast” process gives the mirror surface its special parabolic shape. Once cooled, the mirror will be polished for two years before reaching an optical surface precision of less than one-thousandth of the width of a human hair.

As long as work is allowed to go on, researchers plan to have the Giant Magellan on site in Chile by 2029.