China has developed a telescope that it hopes will capture foreign or alien communication signals from space. Read on to learn more about this new radio telescope.

In 2016, China undertook a project to build a massive alien-hunting telescope. The five-hundred-meter Aperture Spherical Telescope, known as FAST, may reach the record for the largest radio telescope ever built. Why create a huge radio telescope? They want to hunt for alien communication signals from space.

How wide are 500 meters? Five hundred meters, or 1,640 feet, is the same as ten football fields in length. An aircraft carrier measures about 1,000 feet. As a result, the increase in surface area, which exceeds the famous Arecibo Observatory, will have three times the sensitivity. For the record, the Arecibo Observatory merely measures 300 feet in diameter.

Since its launch, FAST has so far detected and identified 99 pulsars. Millisecond pulsars make up more than 30 of the captured pulsars. According to Zhu Ming, the director of the FAST operations center, the collection of information covers an intense amount of work.

“In the process of observing signals from celestial bodies, we also collect signals that might be emitted by humans or extraterrestrial intelligence,” says Zhu Ming. “Furthermore, about 99 percent of most signals we see come from various noises.”

As a result, much of their work involves isolating the noise they want to look at and decipher. Merely being able to detect such signals when other telescopes cannot is groundbreaking. They hope that they might finally find some indication of alien life. 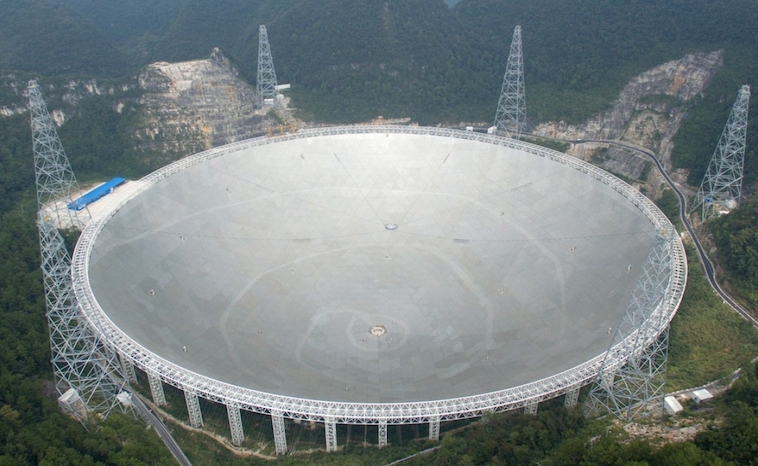 Over the last three years, much of their testing revolves around pulsars. Li Kejia, a researcher from Peking University, says they mainly use FAST to measure the performance of a pulsar timing system. As a result, they can measure the existence of gravitational waves. Since the sensitivity of the radio telescope is so high, they can collect accurate data.

“FAST has a promising future in terms of gravitational-wave detection,” says Mr. Kejia.

Professor Sun Xiaohui believes that the radio telescope will also provide use for other scientific observations. He hopes that astronomical organizations from around the world come together and conduct research. The collaboration may result in solving many mysteries of the galaxy.

Engineers and researchers report that testing over the last three years has gone well. According to Jian Peng, chief engineer, they hope to improve the reliability of FAST going forward. Furthermore, they would like to increase their effective observation time to 50 percent.

Scientists and engineers do not have a full staff to operate the telescope. Its remote location does not appeal to many astronomers. FAST coordinators hope that one day, they will have the amount of staff needed to use the telescope at full capacity. The observatory has an offer of a $1.2 million grant to astronomers looking to join the FAST team. Hopefully, they will have success in the coming years of attracting talented astronomers to help their program.