The study of astronomy requires labor-intensive calculations that today are accomplished primarily with calculator and computers. During the 1600’s a Scotsman named John Napier created math tables to speed up the calculating process. It changed the world. Read on to learn more about Napier’s invention.

In astronomy, we know the famous names like Galileo, Brahe, Copernicus, and Kepler. We know them because of their important discoveries that led to our understanding of the universe. These great astronomers often employed the use of equations by other brilliant men to reach their conclusions. If it were not for the logarithms of the Scottish inventor John Napier, Kepler may not have completed his Rudolphine Tables.

Invented in 1614, Napier’s logarithms allowed people to do more calculations in one hour than they could previously have done in a day. 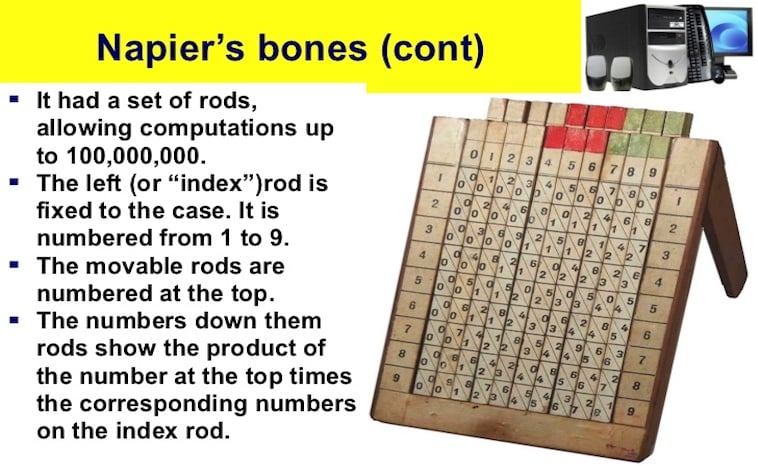 Logarithms turn complicated multiplication and division problems into addition and subtraction. They are laid out in logarithmic tables, popularly known as ‘log tables’.

Logarithms depend on ratios between numbers. By substituting different ‘artificial’ numbers for the numbers you are working with, you make calculations on ‘artificial numbers’. You then convert the resulting total to the actual answer.

In 1614, discussed logarithms in his text ‘Mirifici Logarithmorum Canonis Descriptio’. Two years later, an English translator named Edward Wright translated the book into English. The book had 57 pages of explanatory matter and 90 pages of tables of numbers related to natural logarithms. He also discussed theorems in spherical trigonometry, which later became known as Napier’s Rules of Circular Parts.

He gained much acclaim for his invention of logarithms. The prominent English mathematician Henry Briggs visited Napier in 1615 and the two men worked together on the concept. Briggs came up with a revised table that made it quicker and easier to perform calculations by hand. This way, logarithms found application in several fields including astronomy, dynamics, and other areas of physics.

Napier appreciated that, for the most part, practitioners who had laborious computations generally did them in the context of trigonometry. Therefore, as well as developing the logarithmic relation, Napier set it in a trigonometric context so it would be even more relevant.

In 1617 Kepler heard about Napier’s invention of the logarithms. As a matter of fact, he understood at once their importance and knew they would save him time and effort. Each computation necessary for his Tables required strenuous effort laboring over each equation. Therefore, Kepler became the first in astronomy to apply Napier’s invention on a large scale. From here on Kepler developed his own theory and logarithmic tables.

To complete the tables, Napier computed almost ten million entries from which he selected the appropriate values. Napier himself reckoned that computing these many entries had taken him twenty years, which would put the beginning of his endeavors as far back as 1594.

Born in 1550 to an affluent family, Napier attended studies at St. Salvator’s College in St. Andrews. He did not complete his studies and traveled throughout Europe instead. He returned home and took over running the family farm. At this point, he began working on his math tables as a hobby. Consequently, he discovered the decimal point for use in reducing mathematical calculations.

John Napier’s hobby, calculating math, helped Johannes Kepler compute correctly the necessary information to publish his Rudophine Tables. The book accurately charted the location of the stars and planetary movement. Although each man remained dedicated to their own area of interest, their lives intertwined to set in motion the biggest discoveries in math and astronomy.