For the first time ever a space probe has landed on the dark side of the moon. Read on to learn more about this historic event.

On January 3rd of this year, China successfully landed Chang’e 4, space rover, on the dark side of the moon. The technicians at the Beijing Aerospace Control Center (BACC) in Beijing happily celebrated this event. The scientific instruments mounted on the lander and rover will analyze both the surface and the subsurface. Before launching their probe, the Chinese placed a relay satellite named Queqiao into orbit around the moon. This satellite will act as a communication transmitter between Chang’e 4 and Earth.

Dark Side Of the Moon

Scientists have never landed probes on the dark side of the moon. All of NASA’s moon landings occurred on the side that faces the Earth. Landing on the dark side is a bit more tricky because of lack of communication due to the moons rocky structure.

FUN FACT: The “Dark” side of the moon receives the same amount of sunlight as the side that faces the Earth.

We never see the “dark side” because of tidal locking. The moon’s shape help keeps it in sync with Earth. A “moon day,” the amount of time it takes for the moon to rotate around itself once, is about four weeks long. If the moon didn’t rotate at all, we would see all of its sides. It would alternately show its near and far sides to Earth. Its turning is the very reason that we see always see the same face of the moon. 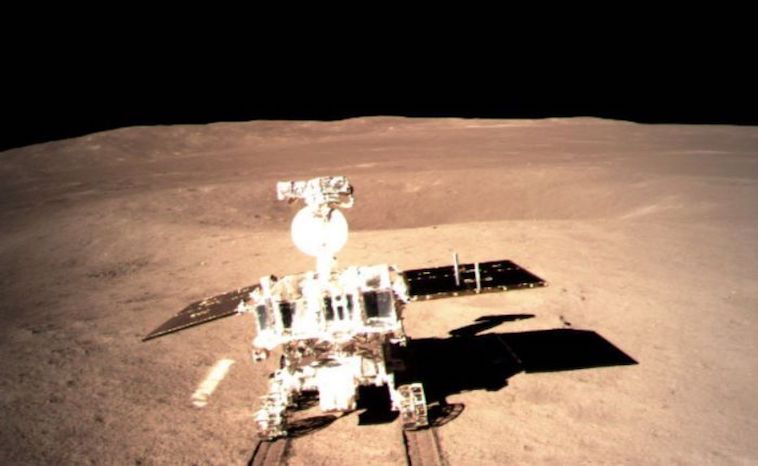 The lander features a Landing Camera, Terrain Camera, Low-Frequency Spectrometer, and the Lunar Lander Neutrons and Dosimetry. The rover, Yutu-2, has a Panoramic Camera, Lunar Penetrating Radar, Visible and Near-Infrared Imaging Spectrometer, and an Advanced Small Analyzer for Neutrals. In Chinese folklore, Yutu is the white pet rabbit of Chang’e, the moon goddess who lent her name to the Chinese lunar mission.

Chang’e 4 will have the ability to characterize its surroundings in great detail. Furthermore, it will probe the composition of the surface as well as the layered structure of the ground beneath the lander’s feet. Understanding this may help researchers find out why the near and far sides remain different. For example, dark volcanic plains called “maria” cover much of the near side but are nearly absent on the far side.

The Chang’e-4 probe is aiming to explore a place called the Von Kármán crater, located within the much larger South Pole-Aitken (SPA) Basin. Researchers believe giant asteroid hit the moon early in the Moon’s history.

“This huge structure is over 2,500km (1,550 miles) in diameter and 13km deep, one of the largest impact craters in the Solar System and the largest, deepest and oldest basin on the Moon,” Andrew Coates, professor of physics at UCL’s Mullard Space Science Laboratory in Surrey, told the BBC.

The event responsible for carving out the SPA basin punched through the moon’s surface into the mantle.

Over the next several years, Chinese researchers, along with NASA hope to discover the answers to their questions. We look forward to following along in their journey.