In June 1989, those attending the famous aeronautical fair Le Bourget, on the outskirts of Paris, were pleasantly surprised. Among the numerous planes that participated in the festival was a very exceptional guest: the space shuttle ‘Buran’ on the back of Antonov’s An-225, the heaviest man-made plane.

With six turbochargers, the An-225 was a real giant, much larger than the Boeing 747 SCA (Shuttle Carrier Aircraft) that NASA used to transport its shuttles from coast to coast of the United States.

However, unlike the SCA, the An-225 arrived too late. He barely made it on his first flight on December 21, 1988, just a few months earlier.

Until then, the Soviet Union had not been able to transport parts of the Buran program by air.

Indeed, the ‘Energy-Storm’ program, which emerged in the mid-1970s as a Soviet response to the US military shuttle program, soon had to face the same problem that plagued the development of the Soviet lunar super-rocket ‘N1’.

The problem was how to transport huge parts of the ‘Energy’ carrier and the ‘Buran’ rocket plane to the Baikonur cosmodrome.

All other missiles were forced to use the extensive Soviet railway network, which imposed restrictions on the maximum diameter of rocket parts due to tunnels and bridges and other cargo safety reasons.

For that reason, if you wanted to launch a rocket with a diameter of more than 4.5 meters, the engineers had to use their imagination.

For example, the first stage of the Proton rocket was designed with six side fuel tanks – hydrazine – around the central oxidizer tank, so that, although the diameter of the stage was 7.4 meters, all elements could easily be sent separately in wagons to Baikonur.

In the case of ‘N1’, it was obviously not possible to transport the entire rocket to Baikonur (it was longer than 100 meters!), so the decision was made to transport parts of the large launcher by rail in order to complete the final assembly. 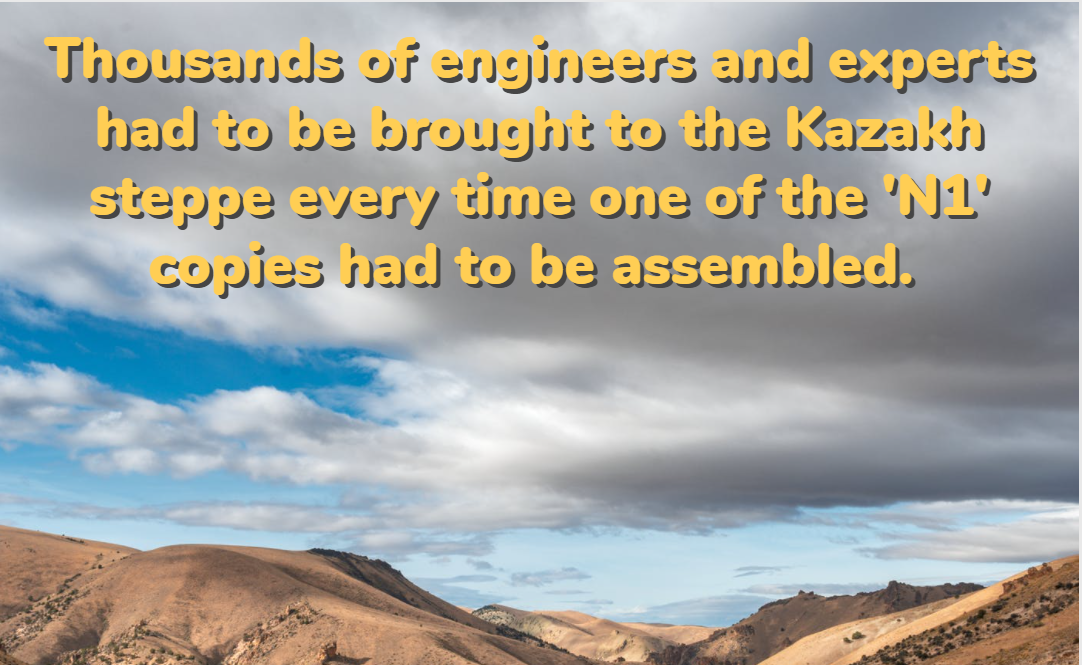 In essence, in Baikonur, it was necessary to transfer all the facilities that the project bureau OKB-1 / CKBEM had in Moscow, Kuibyshev and other cities for this task.

Thousands of engineers and experts also had to be brought to the Kazakh steppe every time one of the ‘N1’ copies had to be assembled.

The process proved to be very expensive and inefficient, as the facilities at Baikonur never monitored the quality of the rest of the specialized infrastructure.

An alternative had to be found for the ‘Energy-Buran’ program. But the problem is that Baikonur was located in the middle of Asia, unlike Cape Canaveral, where large loads could be delivered by sea.

The grandiose plans proposed a decade earlier for ‘N1’ to move in stages by barge along the Volga, and then to Baikonur by a new railway, have been revived.

The possibility of creating special roads or using large balloons was also considered, but all these proposals were rejected due to their cost or technical complexity.

Although the transfer of elements of the “Energy” rocket and the “Buran” program using Milo’s Mi-26 helicopters – the largest in the world – has also been seriously studied, this solution failed due to the danger of carrying such heavy loads and limited range of this type of aircraft, involved dividing each trip into several stages.

The only alternative was to follow NASA’s example and use airplanes. For a time, it was considered to build a ‘super-plane’ for this task, such as the ‘Hercules’ (‘Hercules’) project, a huge 900-ton six-engine triplane with a payload of 450 tons, but it was dismissed as too ambitious.

It was an expensive concept for the late 70s.

But more on this in the next blog!