Where oh where has all the gas gone? This is the question researchers have been puzzling over in the galaxy of NGC 4569.
Although, scientists noticed quite some time ago that the gas was disappearing from this galaxy, they didn’t know where it was going…until now.

The recent discovery of a spectacular tail of gas, which spans more than 300,000 light-years across, is coming from a nearby galaxy. This plume is made up of hydrogen gas (the same material new stars are made of) and is spanning five times longer than the galaxy itself!

The “gas-leak” was discovered by an international team of scientists led by Dr. Alessandro Boselli at the Laboratoire d’Astrophysique de Marseille in France, and published in the journal Astronomy & Astrophysics. 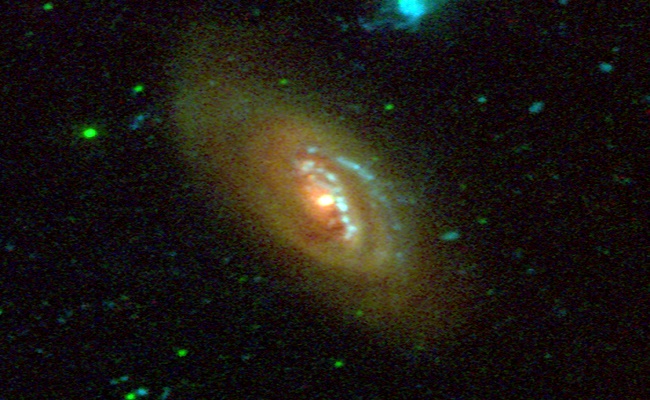 NGC 4569 is nestled in the Virgo cluster, which is a part of a group of galaxies 55 million light-years from the Milky Way, and is travelling through the cluster at about 1,200 kilometers a second.

Dr. Cortese lets us in on the principle behind the loss of gas. He said;

“We know that big clusters of galaxies trap a lot of hot gas. So when a galaxy enters the cluster it feels the pressure of all the gas, like when you feel the wind on your face, and that pressure is able to strip matter away from the galaxy.”

Along with the use a super-sensitive camera on the Canada-France-Hawaii Telescope, researchers were able to observe NGC 4569 for longer than ever before.

Dr. Cortese reveals that NGC 4569 could be the first of many galaxies found to have long tails of gas extending from them.

“It’s pretty exciting because this was just a pilot and we only targeted the brightest spiral galaxy in the Virgo cluster,” he said. “We were amazed by what we got. This is really promising because it means it’s very likely we’ll find similar features in many other galaxy clusters.”

The loss of gas is just one of the many wonders that these galaxies behold. What will be discovered tomorrow is yet to be revealed, but what we do know is that is sure to be amazing!