The Japanese Aerospace Exploration Agency fired a copper cannonball into an asteroid named Ryugu. Read on to learn more about what scientists have discovered.

What happens when a copper cannonball hits an asteroid? That’s a question that Japanese scientists wanted answers to when they sent their Hayabusa 2 spacecraft to Ryugu in 2014. The data collected during the impact has revealed information that scientists long suspected.

Up until the time of the cannonball strike, scientists knew some basic things about Ryugu. For example, they knew that the 3,000-foot wide asteroid had a dry composition. They believe that it has similar properties to sand here on Earth. Furthermore, scientists knew that boulders covered its surface. Once Hayabusa 2 reached the asteroid, it began to take pictures. The pictures revealed not just boulders but an even distribution of dark and rough rocks. In addition, they saw rocks that were bright and smooth.

Hayabusa 2 released a Small Carry-On Impactor (SCI) to experiment. Small Carry-on Impactor (SCI) is one of the instruments carried on Hayabusa-2 used for active exploration on the surface. The SCI consisted of a disk impactor made of copper with a diameter of 30 cm. This disk became deformed by the explosion to form a semispherical shell or copper cannonball, which accelerated to a velocity of 2km/s for the collision.

After deploying the SCI, Hayabusa 2 moved to a safe distance from the blast site. It also deployed a small DCAM3 camera to capture the explosion. Cameras onboard Hayabusa 2 captured the moment of impact. Once the ball it the surface, it created a 33-foot wide crater. The crater itself became shaped like a semicircle. It had an elevated rim and a central pit. The artificial crater produced a new fresh surface for sampling purposes. In addition, it sent a plume of material into space. However, the plume did not form the way scientists expected. The plume of material never detached from the surface. Why? Scientists believe that the asteroid’s gravity pulled against the material. 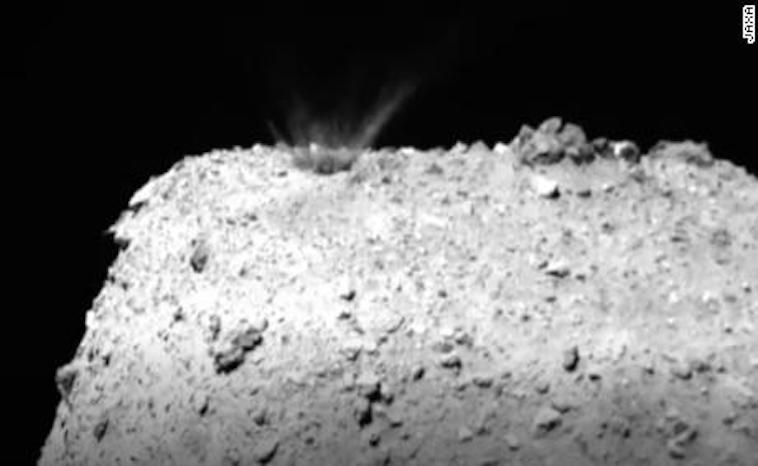 Researchers determined that the asteroid contained highly porous material. They found that the rocks are similar to carbonaceous chondrites. Carbonaceous chondrites are primitive and undifferentiated meteorites that formed in oxygen-rich regions of the early solar system. Metals found in these forms as silicates, oxides, or sulfides. Some of the rocks contain small, colored materials called inclusions. They believe the inclusions could contain olivine. Olivine, a green mineral, is a primary component of the Earth’s upper mantle. Furthermore, it is a common mineral in Earth’s subsurface.

Scientists believe that this type of porous asteroid helped formed early planets. “Fragile, highly porous asteroids like Ryugu are probably the link in the evolution of cosmic dust into massive celestial bodies,” said Matthias Grott, study author and expert at the German Aerospace Center’s Institute of Planetary Research. “This closes a gap in our understanding of the planetary formation, as we have hardly ever been able to detect such material in meteorites found on Earth.”

What happens next for Hayabusa 2? Hayabusa 2 departed Ryugu in December 2019 and should arrive back on Earth by the end of 2020. It has samples from two landing sites from Ryugu. It will become the first mission to bring back samples from a Class-C asteroid.

We look forward to learning more about the asteroid in the coming years.