After a long awaited journey, the Perseverance rover will land this week on Mars. Read on to learn more about its journey and mission.

In July 2020, NASA sent its Perseverance Rover to Mars on a mission designed to find life on Mars. NASA has sent Perseverance with technologies that they hope will provide information about future habitats on the red planet. In addition, it also carries onboard the first helicopter, Ingenuity, to visit another world.

Perseverance will touch down on Mars on Thursday, Feb. 18, 2021, at approximately 12:55 p.m. PST (3:55 p.m. EST). During landing, the rover plunges through the thin Martian atmosphere, with the heat shield first, at a speed of over 12,000 mph (about 20,000 kph). A parachute and powered descent slow the rover down to about 2 mph (three-fourths of a meter per second). A large sky crane then lowers the rover on three bridle cords to land softly on six wheels. Landing on Mars is hard.

The Perseverance rover has many jobs to perform once it arrives at the Jezero crater. These include the following,

1. Testing a method for producing oxygen from the Martian atmosphere

2. Identifying other resources (such as subsurface water)

3. Improving landing techniques and characterizing weather dust and other potential environmental conditions that could affect future astronauts living and working on Mars.

NASA hopes that they have calculated correctly to get Ingenuity to fly in Mars’ thin atmosphere. Ingenuity’s success means that one day astronauts would be able to explore the red planet from the atmosphere. This would allow further exploration of terrains unapproachable on foot.

The helicopter does not carry science instruments. Its objective is an engineering one: to demonstrate rotorcraft flight in the extremely thin atmosphere of Mars. Ingenuity will have to overcome its first test, to survive the frigid Martian night for the first time. Mars has freezing temperatures, with nights as cold as minus 130 degrees Fahrenheit (minus 90 degrees Celsius) at Jezero Crater. These temperatures will test the design limits of Ingenuity’s functioning parts. NASA tested Ingenuity in extreme temperatures here on Earth and believes they will hold. NASA has built into Ingenuity programmable thermostat that they hope will keep it warm on Mars. 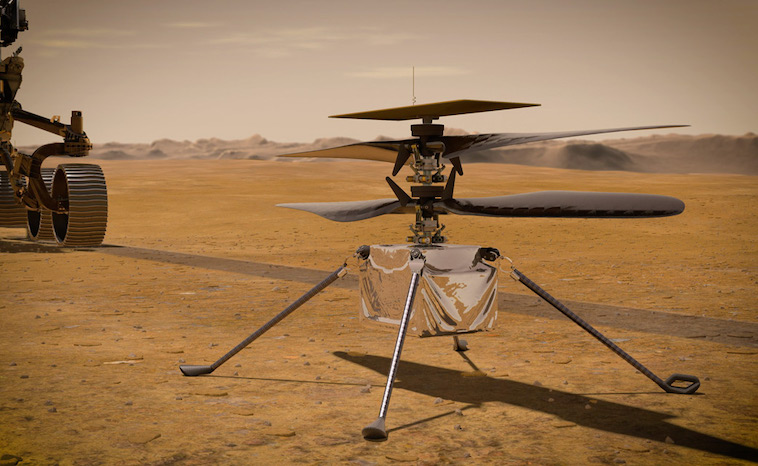 If all goes well with Perseverance’s landing, and NASA finds a suitable site, they will deploy Ingenuity. It will take months for them to deploy the helicopter. A suitable site would mean finding a flat area free of obstacles that may impede Ingenuity’s take off.  The rover will assist in communications back and forth from Earth throughout the helicopter’s commissioning and flight test campaign. NASA hopes that Perseverance will be able to take pictures of Ingenuity in action. During the flight, Ingenuity will analyze sensor data and images of the terrain to ensure it stays on the flight path programmed by project engineers.

Jezero once contained a lake, which scientists think holds evidence of ancient microbial life. The Mars Reconnaissance Orbiter’s CRISM instrument has revealed that the crater contains clays. These clays only form in the presence of water. On Earth, scientists have found such clays in the Mississippi River delta. Upon further analysis, they found microbial life embedded in the rock. NASA believes that this makes Jezero Crater a great place to fulfill Perseverance’s mission.