One of the latest shots of Pluto received on December 24th, 2015 shows an “X” marking right in the middle of Sputnik Planum–an ice plain that forms the left side of Pluto’s “heart” feature.” But what this unique photo shot by the Long Range Reconnaissance Imager (LORRI) on the New Horizons spacecraft has is researchers taking on a new theory.

According to scientists the Sputnik Planum is a couple of miles lower than its surrounding area, but not by any means flat. In fact, there a cells (or polygons) about 10 to 25 miles wide (16 to 40 kilometers). These cells have ridged margins and raised centers, varying in approximately 100 yards (91 meters) of height.

Kind of like those 70’s lava lamps, mission scientists believe the nitrogen-dominated ice of Sputnik Planum is bubbling and cooling to created these exciting patterns of cells. The process is likely because of a reservoir located several miles deep (in some places) of solid nitrogen that when warmed by Pluto’s modest internal heat, becomes buoyant, rises up in great blobs and then cools off and sinks again to renew the cycle. 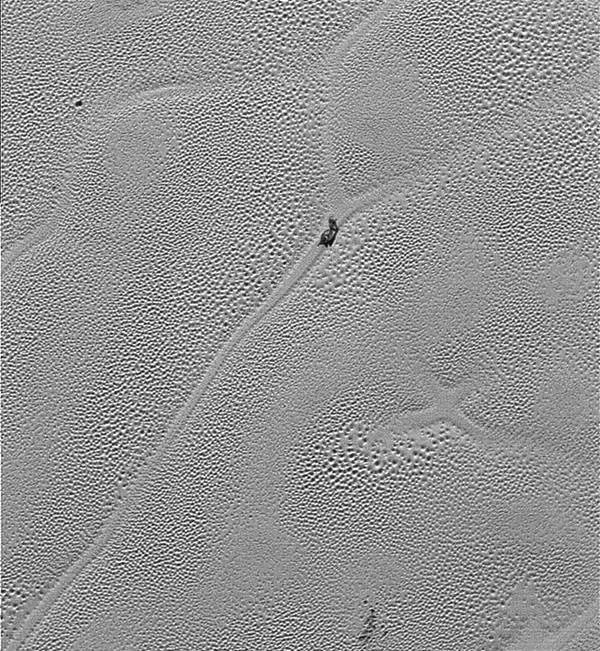 Photo Credit; NASA –  The darker patch at the center of the image is likely a dirty block of water ice “floating” in denser solid nitrogen, and which has been dragged to the edge of a convection cell. Also visible are thousands of pits in the surface, which scientists believe may form by sublimation.

Thanks to computer models, scientists now know that the overturning of solid nitrogen can slowly evolve and merge over millions of years. And those ridge we mentioned earlier? These are marking where the cooled nitrogen ice has sunk back into the planet, leaving behind the formation of “walls.” Interestingly enough, the “X” feature was most likely formed by a quadruple junction where four convection cells met.

Numerous, active triple junctions can be seen elsewhere in the LORRI mosaic.

The images from New Horizons has been a wonderful journey, not only in pictures, but in what we are beginning to and further understand about this amazing dwarf planet. Who knows what else is sure to come to light in the coming months?