Make A Wish Upon This Small Star

Imagine standing very far back from a lighthouse and trying to see a single candle burning in the window. It would be very hard to see right? While looking for planets astronomers discovered something very small. Read on to discover what they found.

Astronomers from the University of Cambridge recently announced the discovery of a small mass star located about 600 light years from Earth that burns 2,000 to 3,000 times fainter than our own sun.  A small mass stars means that it spends billions of years fusing hydrogen to helium. Over its lifetime, a low mass star consumes its core hydrogen and converts it to helium. The core shrinks and heats up gradually and then the star becomes more luminous.

Part of a binary system, astronomers detected the star using their WASP system. WASP stands for Wide Angle Search for Planets. Identified as a non planet using a CORALIE Spectrograph, EBLM J0555-57Ab passed in front of, or transited, its larger parent star. This formed an eclipse in the stellar binary system. The parent star became dimmer in a periodic fashion, the signature of an orbiting object. Researchers from the University of Cambridge found that the star measured slightly larger than Saturn. It remains quite tiny compared to other stars. Fortunately, EBLM formed with enough mass to sustain itself. Had the star formed with a slightly lower mass, the fusion reaction in its core would diminish and transform it into a brown dwarf. In the class of star categories, a brown dwarf does not make the cut, and is considered a failed star.

Researchers became excited to find this star due to the recent discovery of TRAPPIST-1. Trappist-1, an ultra cool dwarf star, maintains 7 Earth sized worlds in its orbit. 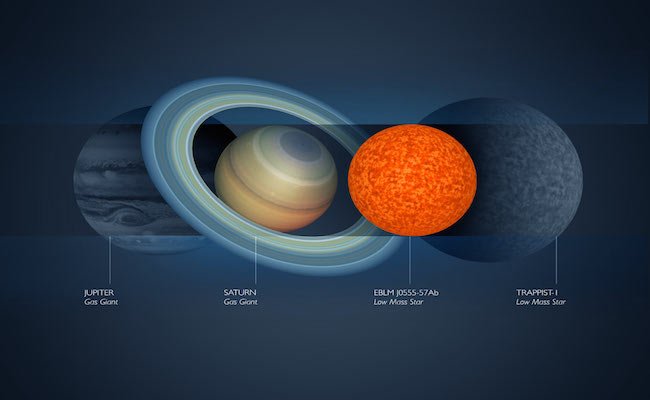 Jupiter is so massive and has such a strong gravitational pull, it likely prevented the formation of a planet between itself and Mars in the region known as the asteroid belt.

“The smallest stars provide optimal conditions for the discovery of Earth-like planets, and for the remote exploration of their atmospheres,” said co-author Amaury Triaud, University of Cambridge.

Due to the impact of a star on the planets that orbit it, researchers admit the need to understand smaller stars. Smaller stars create natural fusion, something that scientists want to create in the laboratory. With all the darkness in the universe, trying to find a tiny faint star seems impossible. Astronomers believe they make up the majority of the stars and admit planets are easier to detect.

Hopefully astronomers will discover one of these a little closer to home. Until we learn to travel at light speed, 600 light years away makes studying these stars quite difficult. The invention of something that could help us travel light speed would certainly aide in the study of stars and planets.