The Sun: Our brightest star in the universe

Hello, sunshine! Always wanted to know more about the largest star in the universe? We have some sun fun-facts for you. Read on and discover our brightest star: the Sun!

The beginning of our brightest star

Our Sun formed approximately 4.6 billion years ago from the gravitational collapse of matter within a region of a large molecular cloud. The central mass became so hot that it initiated nuclear fusion in its core. Almost all stars form by this same process. The enormous effect of our Sun on our Earth has been recognized since prehistoric times. Our Sun has been regarded by some cultures as a solar deity. The rotation of Earth and its orbit around the Sun are the basis of solar calendars, one of which is the Gregorian calendar, the predominant calendar in use today.

It is a common misconception that our Sun is yellow or orange. When our Sun is low in the sky, atmospheric scattering renders the Sun yellow, red, orange or magenta. But viewed from space, the Sun’s color looks white. However, our Sun is essentially all colors mixed together, which appear to our eyes as white or yellow. Our Sun is a nearly perfect sphere. It has an oblateness estimated at about 9 millionths, which means that its polar diameter differs from its equatorial diameter by only 10 kilometres. Our Sun and its sunlight are by far the most important source of energy for life on Earth. Its diameter is about 1.39 million kilometers! Our Sun accounts for about 99,86% of the total mass of our solar system. Three quarters of the Sun’s mass consists of hydrogen. The rest is mostly helium, oxygen, carbon, neon and iron. 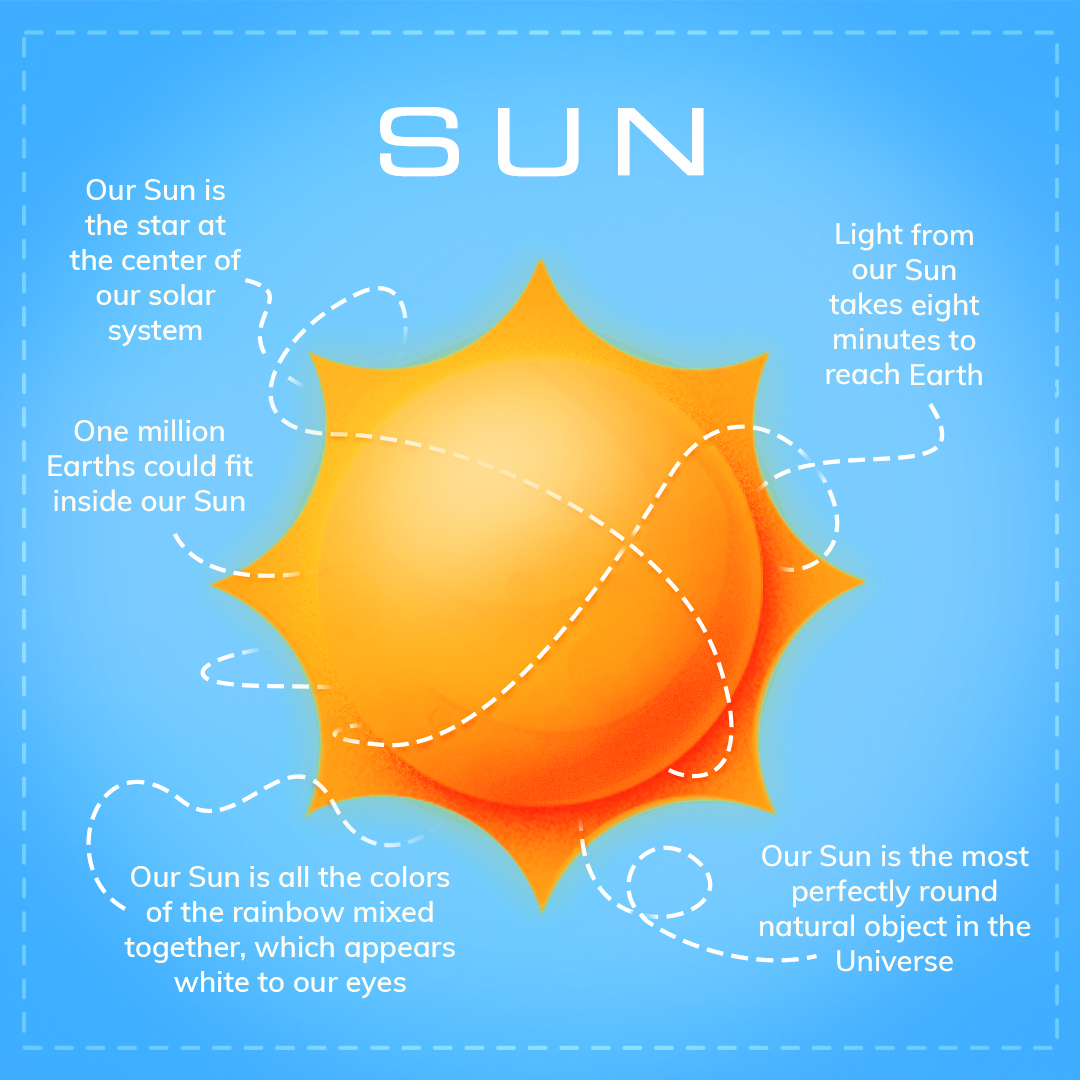 The characteristics of our Sun

The brightest object in the Earth’s sky is our Sun with a magnitude of -26,74. This is about 13 billion times brighter than the next brightest star Sirius. To this day our Sun is roughly halfway through the most stable part of its life. It has not changed for over four billion years, and will remain fairly stable for more than five billion years.

Our Sun is located about 27,000 light-years from the center of our Milky Way galaxy. Our brightest star is contained in a space of rarefied hot gas. You have probably heard that you shouldn’t look at the Sun directly. Viewing the Sun with your naked eyes can permanently damage your eyesight. If you want to watch our Sun, you can do so safely by using a solar viewer, or attaching a solar filter to a telescope.

Curious about more facts about the sun? Here are ten sun fun-facts for you!

> The gravitational pull of the planets in our Milky Way determines the course of our Sun.
> Our Sun is all the colors of the rainbow mixed together, which appears white to our eyes.
> One million Earths could fit inside our Sun.
> Our Sun is travelling at 220 kilometres per second.
> Our Sun rotates in the opposite direction to Earth.
> Our Sun has a powerful magnetic field. It’s about twice as strong as the Earth’s.
> The surface temperature of our Sun is approximately 5,500 degrees Celsius, although this seems chilly in comparison to the core’s temperature.
> Solar winds also create some of space’s more beautiful phenomenons such as the dazzling tails of comets and the Aurora Borealis, or The Northern Lights.
> Light from our Sun takes eight minutes to reach Earth.
> Our Sun will eventually be about the size of Earth.

You now know all about the brightest star in our solar system! Want to shine like the Sun? Name a star in our Online Star Register and be a part of the universe. Enjoy your very own star in the night sky.