Scientists have discovered huge “megaripples” below Louisiana? Where did they come from? Read on to find out what caused these ripples to form.

Did a giant tsunami appear after the Chicxulub asteroid impact? Geophysicists from the Univeristy of Louisiana at Lafayette believe they have located ancient “megaripples” in Louisiana. Their research in the latest journal of Earth and Planetary Science Letters reveals evidence and data collected to support their theory.

Scientists believe an asteroid hit the Yucatan Pennisula about 66 million years ago. As a result, a cloud of dust went into the atmosphere. Over the course of a year, vegetation died. As a result, the surface dinosaurs went extinct. This asteroid may have created a massive tsunami. A tsunami is a large tidal wave. The researchers reasoned that this tsunami would have made its way across the Gulf of Mexico to the shores of North America. Furthermore, they write that such a massive collision would have created a wave up to a mile high as it made its way onshore. If that occurred, then there should be evidence of unique geographical formations. These formations would appear as ripples.

To find the evidence they were looking for, the team obtained seismic data from a petroleum firm that allowed them to look at soil at depths up to 1,500 meters below the surface. They found evidence of what they describe as megaripples. These megaripples appear as huge fossilized ripples created by a massive influx of water, which then recedes. Once they located the megaripples, they focused on their origin point. They found that the flow of water came from the location of the Chicxulub asteroid impact event.

The occurrence of “ripples of that size means something huge had to disturb the water column,” said study lead researcher Gary Kinsland, a professor in the School of Geosciences at the University of Louisiana at Lafayette. “This is just further evidence that the Chicxulub impact ended the Cretaceous period.” 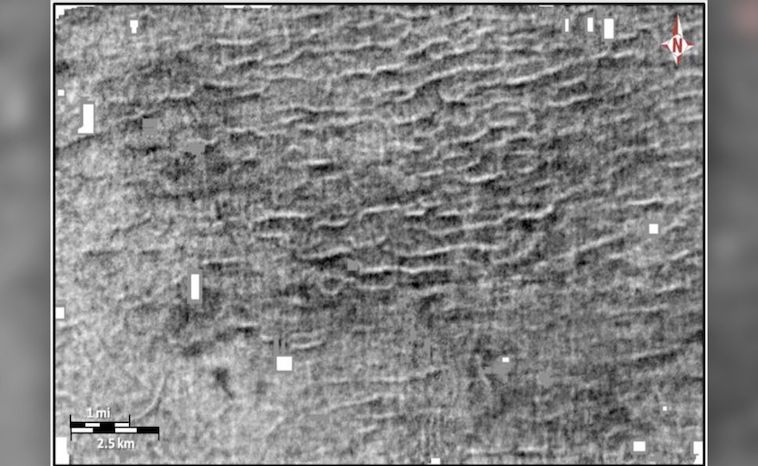 A black-and-white seismic image of the megaripples, created by study co-researcher Kaare Egedahl for his master’s thesis. The seismic image covers an area of about 11 by 7 miles (18 by 11 kilometers). (Image credit: Kinsland, GL. et al. Earth and Planetary Science Letters (2021); Kaare Egedahl)

Researchers determined the tsunami’s direction because the megaripples appeared asymmetrical. This shows the direction water flowed when the ripples were made. In this case, the long, asymmetrical side of the megaripples has a south-southeast-facing slope. Again, this information points back to the Chicxulub impact crater.

The megaripples have an average wavelength (from one crest to the next) of 1,968 feet (600 m). That, combined with their 52-foot-high amplitude, makes them “the largest ripples documented on Earth.” Scientists will continue to study geology under Lake Iatt.